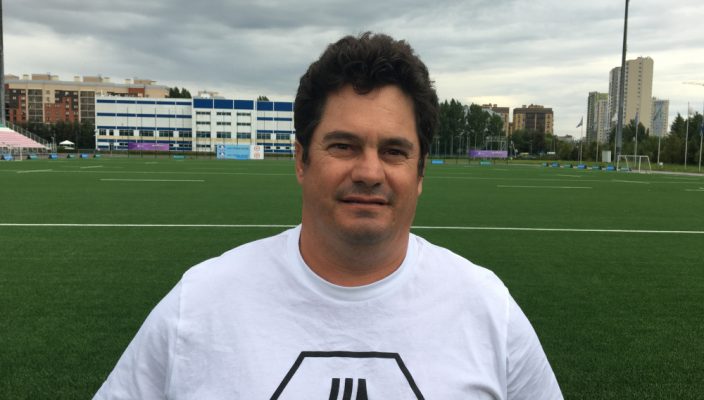 The 42-year-old Tredoux, currently head coach of Russian club Moscow Slava, has been appointed to guide the team’s fortunes on their return to the top-flight Varsity Cup competition next year.

He is relishing a return to South Africa and described Madibaz as a passionate rugby university, whose team always made life difficult for visiting sides.

“Firstly we want to work to ensure Madibaz rugby becomes the preferred destination for the talent which exists in the Eastern Cape,” said Tredoux. “We want to help quality student-athletes develop to their full potential.”

The new Madibaz mentor has extensive experience in coaching, having spent time with South African provincial teams Free State Cheetahs and Leopards, while also developing his coaching pedigree in Japan.

He had a stint with Varsity Cup team Shimlas from Bloemfontein and acknowledged the tough challenge they always faced in Port Elizabeth.

“There is a lot of passion when it comes to Madibaz rugby and it was always a hard game. Having played in the Varsity Cup semifinals two years in a row (2013 and 2014), they have a proud history.”

With Blitzbok Tim Agaba and Springboks such as Garth Wright, Hennie le Roux and Schalk Burger senior from their ranks, he said Madibaz had a proven track record of developing players.

“I have a huge passion for developing young men to reach their full potential, on and off the field. I’m always willing to walk the extra mile for my staff and players, and my coaching staff will work tirelessly to achieve the best possible results.

“My coaching philosophy is about all the players having a high skill level and the ability to make good decisions. We apply this to the job by having a certain framework to develop the skills required to play in this way.”

Madibaz Sport director Yoliswa Lumka said now that they had achieved their goal of regaining promotion to the Varsity Cup competition, they needed to assemble a technical team that would ensure that they were competitive.

“Andre has the necessary rugby coaching experience and understanding of university sport and we believe he will be the adhesive of the team that takes us to higher ground.”

Tredoux grew up in Amanzimtoti in KwaZulu-Natal and attended Free State University after matriculating from Kuswag High.

He turned out for Shimlas and College Rovers in Durban and developed an interest in coaching at schoolboy level while playing for Rovers.

When an injury ended his playing days he took his first job in 2003 as the Cheetahs U20 conditioning and skills coach. That proved the catalyst for his mentoring career.

He linked up with Slava Moscow as their head coach last year and has thoroughly enjoyed the experience.

“But I must admit, it’s not ideal for family life over here and I was excited to get the chance to link up with Madibaz and to take on the challenges ahead,” he said.

“We look forward to the Friendly City and the beach and I can’t wait for a braai, biltong and building some great friendships.”

Tredoux added that planning was well under way for the Varsity Cup.

“There have been several meetings and we have done a swot analysis. We have been looking at the recruitment of talented schoolboys for the long-term future and also the strengthening of our Varsity Cup squad.”

“Our culture will be one where we will have to push the players outside their comfort zones, but also make it an enjoyable environment. It is an approach I believe the players will embrace.”