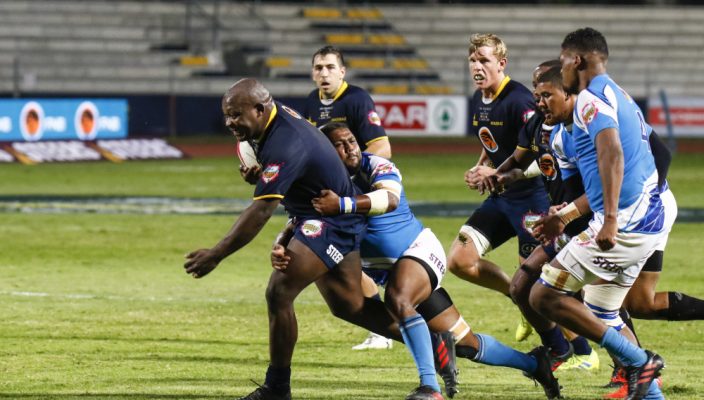 The FNB Madibaz rugby team have their attention firmly focused on another successful season in the Varsity Shield tournament when the opening fixtures are played next month.

This is a crucial year for the Nelson Mandela University club as it represents a golden opportunity for them to return to the top-tier Varsity Cup competition.

The Madibaz were relegated to the Shield after the 2018 Varsity Cup, but are now in pole position to get back into the top-flight.

The Shield team with the most combined log points in the 2019 and 2020 competitions will automatically return to the Varsity Cup next year.

Madibaz, who will again be coached by Jarred Buys, went through their round-robin campaign unbeaten last year and earned a total of 30 points, five clear of closest rivals Cape Peninsula University of Technology. They will be looking to emulate that effort over the next few months.

However, Madibaz Sport rugby manager Ntsikelelo Ngcakana said they were not looking too far ahead and would place their full attention on the Varsity Shield.

“Our key objective for 2020 is firstly to focus on a successful Varsity Shield campaign,” he said. “If we can do that, it will result in our promotion to Varsity Cup.

“The fact that points are carried over from last year is a huge advantage for us.

“But we know there will be a big test ahead of us in the Varsity Shield. Sometimes being favourites can be a challenge as it can cause players to get ahead of themselves. So we know we need to guard against that.”

In terms of playing personnel, he said they had maintained a strong sense of continuity from the 2019 squad.

“It is pretty much the same, but some players who were injured last year are back and ready to play,” said Ngcakana. “I predict that will put more pressure on their peers to produce quality performances this season.”

He added that the squad members had been working hard since regrouping on January 3.

“There were two days of testing, followed by a team-building session, which was very successful.

“Last week we travelled to Cradock to play FNB Central University of Technology [from Bloemfontein]. The game consisted of four chukkas with FNB NMU fielding their strongest side for the first chukka, resulting in us leading 14-7.

“However, with the coaching staff trying different combinations the momentum was lost, ending in a 36-17 win for CUT.”

Madibaz will continue their preparations tomorrow when they play against a Kings outfit at 12.00 at the campus, followed by a match against Rhodes on January 31.

They will open their Varsity Shield campaign against University of KwaZulu-Natal in Port Elizabeth on February 14.