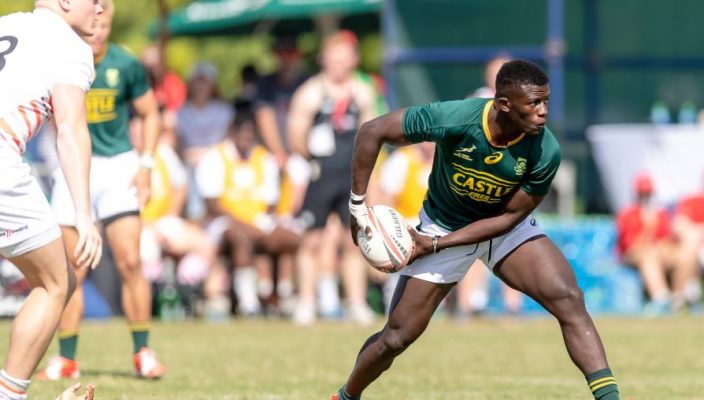 Makata to debut for youthful Blitzboks in Las Vegas

Springbok Sevens coach Neil Powell has selected the 20-year-old debutant Sako Makata in the Springbok Sevens team for the HSBC World Rugby Sevens tournaments in the USA and Canada next month.

The former Stirling High School player will become the 176th Blitzbok since the inception of the HSBC World Rugby Sevens Series 20 years ago when he takes to the field at Sam Boyd Stadium in Las Vegas on Friday, 1 March.

Earlier this month, 21-year-old JC Pretorius was handed his debut in Sydney and with Makata joining him in the forwards, the Blitzboks will travel with a youthful squad to Las Vegas, where South Africa will face Japan, Chile and England in Pool D of the tournament.

Powell also recalled Ryan Oosthuizen, Mfundo Ndhlovu and Muller du Plessis to the travelling 13-man squad that will depart for the USA on Friday, totalling four changes to the side what placed fifth in Sydney in their previous tournament.

Chris Dry was ruled out with a rib injury, while Kyle Brown, the most capped Blitzboks ever, sits out on this trip. Dewald Human and Zain Davids will also remain in Stellenbosch to continue training with the SA Rugby Sevens Academy squad.

The 21-year-old Ndhlovu was due to play in Hamilton and Sydney before a hamstring niggle ruled him out shortly before departure, while Oosthuizen, 23, last played for the Blitzboks at the HSBC Cape Town Sevens.

The 19-year-old Du Plessis, who picked up an injury in the opening match in Cape Town in December, is also eased back into action and will travel east as 13th player.

For Powell, Makata’s inclusion was always on the cards.

“Sako has been with us for the last two years and deserves this opportunity,” said Powell.

“He has been a real stalwart for the SA Rugby Academy side in that time, co-captaining them to Dubai and South America, and now he gets the opportunity he has been working very hard for.”

Makata represented Border at the Under-18 Craven Week in 2016, where he was spotted and scouted into the SA Rugby Sevens Academy. He also played for DHL Western Province Under-19 on the wing in 2017 and represented the Academy in 2018.

“Sako is a strong young man and I am very pleased to have him in the squad,” said Powell.

“JC showed in Sydney that the younger guys are ready and itching to play. Part of the wider strategy this year was to expand the player base and Sako is part of our plans going forward, so his inclusion is a natural progression in our plan.

“Ryan has worked hard since his last tournament in Cape Town and Mfundo and Muller are both fit again, so I am very pleased to be able to take both to North America. Mfundo was unlucky to pick up a strain just before we left for New Zealand and Muller has slotted in well when he returned to the squad last week.”

Powell said the trip will be about restoring pride in their performances: “We are travelling with a younger group, but I have faith in the abilities of every player in the squad.

“We need to regain our consistency and we fixed a number of things at training in the last week, so the focus will be in implementing that in our matches against Japan, Chile and England,” he said.

The Springbok Sevens squad is:

● Branco du Preez was part of the squad that won the HSBC Las Vegas Sevens on all four occasions.

● Werner Kok could score his 100th try for the Blitzboks in the HSBC World Rugby Sevens Series. He dotted down 96 times for his country already.