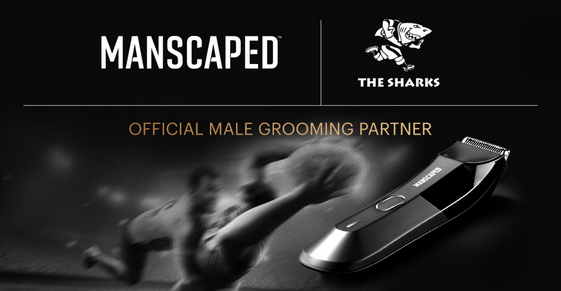 Sink your teeth into this one. Manscaped™, the leading men’s lifestyle brand and male grooming category creator, is teaming up with The Sharks, one of South Africa’s most successful and fan-adored rugby clubs. In good company, The Sharks recently partnered with global entertainment brand
Roc Nation to further amplify the team’s international impact. And this September, as The Sharks compete in the newly formed United Rugby Championship League, they’ll be sporting an Official Male Grooming Partner in Manscaped.

The rapidly expanding grooming brand is known for its commitment to connecting with new regions through their beloved sports teams. Having recently launched in South Africa, Manscaped turned to The Sharks, whose sport of rugby played an important part in South Africa’s history and remains a staple in the country today.

“The Sharks are not only a force in South Africa, but a powerhouse in the global arena,” said Joey Kovac, VP of Marketing at Manscaped. “As some of the most influential athletes in the country both on and off the field, The Sharks are dedicated to the betterment of their local communities and beyond; we’re humbled to work with such an inspiring and internationally-recognized sports organization. And of course, we look forward to cheering on the team, known for playing entertaining and exciting rugby. Nothing better!”

True to their generous nature, The Sharks have launched the Hands Of Hope campaign to help rebuild and uplift nearby communities devastated by the recent circumstances in the region. In addition to providing thousands of meals, The Sharks have raised more than 2.5 million rand to reconstruct the province. Through the team’s partnership with Roc Nation, The Sharks continue to bring their culture of community, inclusivity, and diversity to a worldwide audience.

The Sharks CEO, Dr. Eduard Coetzee, added, “We are thrilled to welcome Manscaped to The Sharks family. Our two brands have a shared vision in terms of our communities and seeing them thrive, as well as being leaders and innovators, in our respective fields. Our support base has a global footprint, and we look forward to working with the Manscaped team and aiding their marketing endeavors in our region.”

The highly anticipated United Rugby Championship will be the most intense and thrilling league to date. Combining teams from rugby’s elite nations – Ireland, Italy, Scotland, Wales, and South Africa – the fierce competition of this world-class 16-team league will be unmatched. Beginning in September, Manscaped’s logo will be prominently displayed at Jonsson Kings Park stadium, home of The Sharks, as the celebrated club ushers in a new era of club rugby.

Rugby is a sport often defined by speed, power, and intensity. This season, Manscaped is adding a little finesse and a whole lotta smooth to the list.

About The Sharks:
The Sharks is a proud and successful rugby franchise located in Durban, South Africa. Over the past three decades, this internationally renowned brand has evolved from a provincial rugby brand to a commercially recognized sporting brand of international acclaim, promoting an intrinsic family lifestyle value as well as fashion, entertainment, and sporting aspiration. With a strong culture of inclusivity underpinned by diversity, The Sharks is the most transformed sporting team in South Africa and have stood at the forefront of creating opportunities since the franchise was established in 1995 and are driven by innovation, community, and integrity. Black and white forms part of our brand identity and the last few years have been newsworthy and successful in several ways. The Sharks have won the Currie Cup (South Africa’s premier domestic rugby competition) on eight occasions and have contributed a record number of players selected for the Springboks. In 2018, The Sharks won the award for the best Digital Platforms at the prestigious SA Sports Industry Awards. The brand has reached significant milestones and is so much more than just 80 minutes of rugby on a Saturday afternoon, promoting hero status for players and role models for the youth. Our players are our greatest marketing tool, and through this channel, we want to use the brand to inspire a generation and create a lasting legacy that is focused on a winning mindset.

About Manscaped™:
Founded by Paul Tran in 2016, San Diego, California-based Manscaped™, is the leading men’s lifestyle consumer brand and male grooming category creator trusted by over two million men worldwide. The product range includes a diversified line of premium tools, formulations, and accessories that are intelligently designed to introduce and elevate a whole new self-care routine for men. Manscaped offers a one-stop-shop at manscaped.com and direct-to-consumer shipping in more than 30 countries spanning the United States, Canada, Australia, New Zealand, the United Kingdom, the European Union, Norway, Switzerland, Singapore, and South Africa. Select products and unique bundles can also be found on Amazon with Prime and pickup options available. Retail placement includes Target, Best Buy, and Macy’s stores throughout the U.S. and Hairhouse locations in Australia. For more information, visit the website or follow on Facebook, Instagram, Twitter, TikTok, YouTube, and Triller.