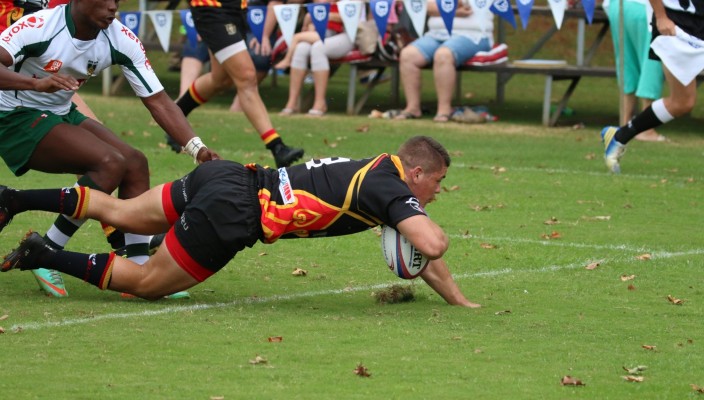 Noord-Kaap certainly improved in their performance but again leaked tries in the second half to give EG Jansen a handsome win.

The boys from Boksburg opened the scoring with a try by prop Rehann Baumann following a ruck on the Noord-Kaap tryline, after wing Dwayne Fourie had made metres down the touchline. A good kick by scrumhalf Ginter Smuts added the two points for a 7-0 lead.

Noord-Kaap replied shortly afterwards with a bullocking try by prop Conrad van Aswegen. This was converted by Cameron Hufke to level the scores at 7-all. It is unusual for the first two tries of a match to be scored by the opposing loose-head props.

From loose play just before the break, scrumhalf Smuts darted over, but this time missed the conversion. At this point EG Jansen led 12-7.

With the resumption of play, Noord-Kaap were quickly on to the attack and Juan-Ray Cloete had a good run to score, but the conversion was unsuccessful, leaving the scores tie at 12-all.

Then it was the EG Jansen show, as they ran in a further four tries. This included two forward tries where they ran with determination to force tries by prop Andre van der Merwe and hooker Werner Fourie. Both were converted by Smuts. The latter also scored a try and the fourth went to Ruben Beytel, to take EG Jansen to a lead of 40-12.

Noord-Kaap came back at the end with a try from Hufke and he came close in the final minutes to scoring once more. Eventually EG Jansen triumphed 40-17.