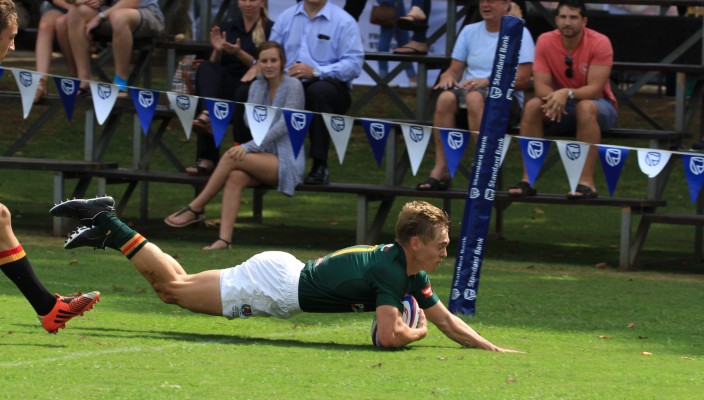 This was a very intense game where both sides had their chances but, in the final assessment, it was the Glenwood forwards who enabled a narrow 14-13 victory by the KZN team.

Glenwood started the match with some early pressure but a handling mistake saw EG Jansen on attack. A kick ahead and it was an open try-line but as the Jansen player attempted to pick up the ball he knocked on.

Further concerted pressure by the team from Boksburg ended with flyhalf Ruben Beytel making a break and scoring the opening points. The conversion was unsuccessful.

Glenwood came back and left wing GJ Lubbe had a strong run down the touch to beat the defence and touch down. Flyhalf Francke Botha succeeded with the extra points for Glenwood to lead 7-5.

EG Jansen went back into the lead when Beytel was successful with a penalty just before the drinks break, taking his side to a narrow 8-7 lead.

The intensity of the rugby continued in the second half with both sides having chances but good defence stopped certain tries. From a forward maul on the try-line Glenwood prop Quintin Vorster forced his way over. Botha added the two points for a 14-8 lead.

EG Jansen came straight back and it was another forward drive ending with hooker Werner Fourie going over. The conversion was again not successful, leaving Glenwood 14-13 ahead.

The last 10 minutes was nail biting with both sides having their chances but missing penalties. This provided the KZN team a narrow win.