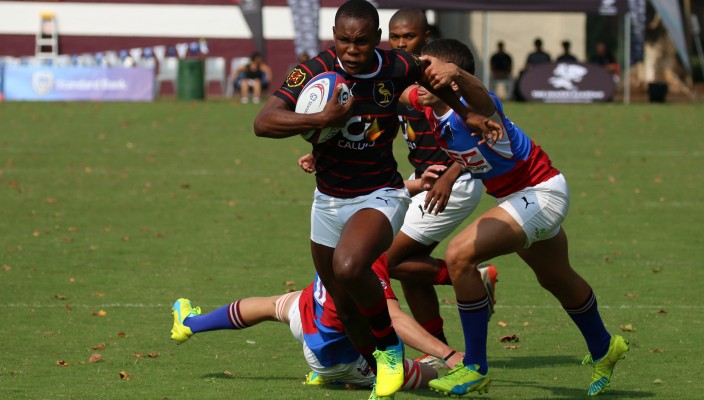 The first match on the second day of the Kearsney Easter Rugby Festival started with a moment’s silence in honour of Blake Kerdachi, the Grade 11 Thomas More schoolboy who died after collapsing in the plane on their return from a rugby tour to Hong Kong.

The Eastern Cape derby, between Dale College from King Williams Town and Hoerskool Framesby from Port Elizabeth, started with Framesby attacking. It was fullback Riann van Rensburg who was tackled just short of the try-line, but five minutes later he again created the overlap and broke through to dot down, for a 5-0 lead.

Dale then started dominating, quicker to the loose ball, getting across the advantage line and four tries were scored in quick succession. The first and last of the four were by the two centres Sibulele Mbana and Siphamandla Matsinya. A good run by scrumhalf Malwande Zamo led to a try under the posts and flank Kwanda Dimaza, who was prominent in both attack and defence, scored with a bullocking run, breaking a number of tackles. Fullback Aphelele Fassi converted three of these.

It appeared as if Framesby were facing a big defeat but they rallied in the last five minutes of the half to score a try after a lineout, when flank Bernard McDonald scored. The conversion from in front of the uprights went wide, leaving Dale 26-10 in front at the break.

The second half saw both sides having opportunities, but Framesby defence had tightened up and Dale made more mistakes. The last quarter saw Dale again start to dominate. First a long range penalty by Siphosethu Dlongodlongo, followed by a good sniping try, put Dale into a commanding 34-10 lead. Three further tries followed by Dlongodlongo, one of which was converted.

In the final minute Framesby lock Ruben le Roux forced his way over for a try, converted by Van Rensburg, to leave the score 46-17 in favour of Dale.