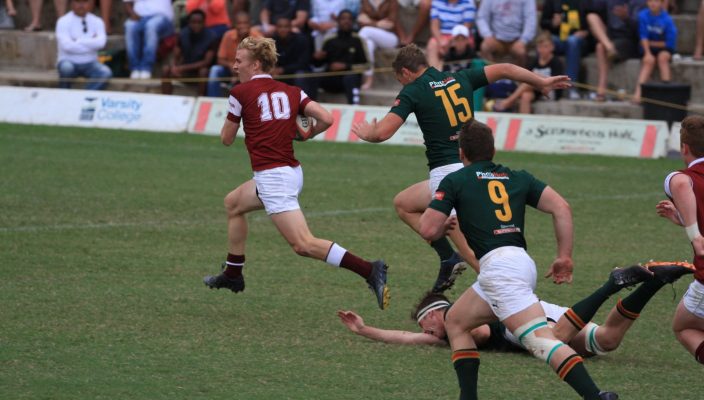 Kearsney travelled to Durban to play in a highly anticipated match against the number one team in KZN this year. The visitors met a strong southerly wind which certainly posed challenges in itself. Kearsney however started very strongly as they attacked from their own 22m area right from the kick off. They dominated play in possession and territory for the first fifteen minutes but only resolute defence and some sloppy handling at times kept the scoreboard quiet during this time.

The visitors exerted good pressure on defence and were soon awarded with a Cameron Ritchie try, after he intercepted a panic pass to dot down under the posts. Winger James Sutherland converted for an early 7 – nil lead.

The next five minutes saw relentless attacking by the hosts and they eventually barged over for Holtzhausen to convert and level the scores at 7 all.

Both teams enjoyed further opportunities but it was the visitors’ ball control that let them down and the score remained the same until the halftime whistle.

Kearsney must have been pleased to enter the second half level with a strong tail wind to start the second half. Surprisingly they did not use the elements and Glenwood scored six minutes from the restart with lock JJ van der Mescht diving over after some power play by the hosts’ forwards. Centre Holtshauzen converted for a 14 – 7 lead.

Kearsney fought back but again their inability to use the strong favourable wind, coupled with poor kicking skills, cost them in terms of possession and territory. The Glenwood carriers in Palvie and Van der Mescht put the Kearsney defence to the test during this phase of the match.

The visitors defended very well but eventually the Glenwood flyhalf slipped through two defenders to score a converted try. The last eight minutes were very even with both teams attacking with intent but remained scoreless and with the final score 21 – 7 in favour of the hosts.