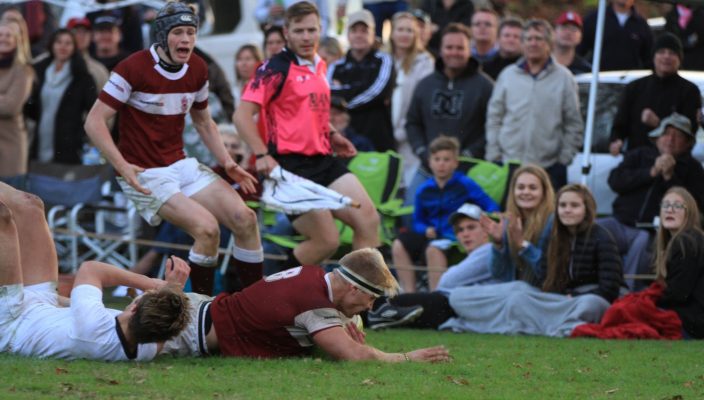 Kearsney hosted Hilton on the return leg of the double header fixture in good playing conditions on their 95th anniversary Founders Day weekend. Both teams were in good form and the match promised to be a humdinger and probably a decider as to the second best team in KZN.

First points of the match came from the Hilton captain and fly half Angus Curtis with a penalty after a breakdown infringement by Kearsney. The hosts soon replied with a James Sutherland penalty to level at 3 all which remained until half time. Both teams attacked and defended very well during the first half but both goal kickers could not convert the opportunities presented.

Kearsney started the second half with a different approach – a more direct attack and it seemed to work well. Ironically Hilton scored early in the half from a ripped turnover for winger Darren Mcghee to score in the left corner. Kearsney continued with their renewed approach and soon got the upper hand on the visitors. The hosts dominated the second half and Sutherland converted a penalty resulting from relentless pressure.

Only resolute defence by the visitors prevented further points for most of the half. The hosts did squander point-scoring opportunities with unforced errors, but eventually man-of-the match flanker Luke Croshaw scored from a pick and go movement which Sutherland converted for a 13 – 8 lead.

The hosts seemed in total control from then and scored another entertaining try which came from good backs and forwards play in which Dylan Richardson and Croshaw were very prominent with Sutherland producing an incredible offload while airborne to Ross Taylor who dived over in the left corner. Sutherland converted for the final score of 20 – 8 to Kearsney.

It was a memorable match with both teams playing attractive rugby and displaying excellent skills and solid defence which the sizable crowd thoroughly enjoyed. Outstanding players for Kearsney were Luke Croshaw, Dylan Richardson, Cameron Ritchie, Cameron Craze and Ross Taylor.