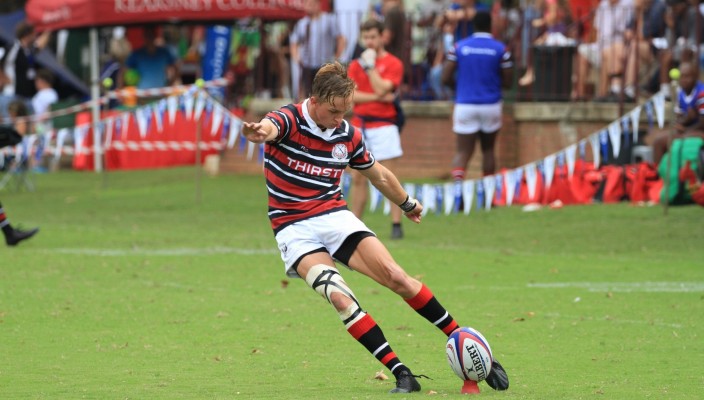 The penultimate match on the first day of the festival saw two of the smaller sides, Dale and Maritzburg College, face each other. There were too many mistakes in the match to make it a good one and Dale were quicker on to the loose ball to give them a good win.

Dale took their chances while College’s handling sometimes let them down.

It was left wing Bamanye Xenxo that scored followinga long diagonal kick from fullback Aphelele Fassi. This gave Dale a 5-0 lead. This they increased to 12-0 after right wing Litha Nkula snatched the ball from a College player who was waiting for the high ball. Nkula had a free run to the tryline scoring under the poles to give Siphosothu Diongodlongo and easy two points.

College scored their first points when wing Xolisa Guma kicked ahead and scrumhalf Lodewyk Muller dived over in the corner. This narrowed the gap to 5-12. A penalty late in the half by Reuben van Blerck brought them seven points behind Dale.

Maritzburg College had the better of the second half winning more possession but there were too many mistakes both handling and at the breakdown. This played into Dales hands.

A penalty by flyhalf Van Blerck and then a good try by Andile Khanyile narrowed Dale’s lead to just two points. A fortuitous kick ahead from a poor pass by flyhalf Dlongodlongo saw him gather the kind bounce and score under the posts. This time it was fullback Fossi that converted for a25-16 win.