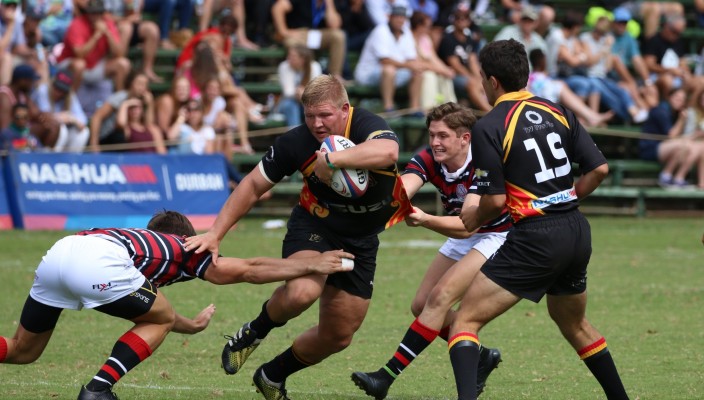 The KZN side Maritzburg College, who had not yet won at the festival, were again on the losing end. They were playing EG Jansen who had a definite advantage in both size and pace, however. College let themselves down by missing vital tackles. As the game progressed, so EG Jansen used their pace to good effect. But College’s tackling improved in the second half.

For the first quarter College kept EG Jansen at bay, except for their first try which was scored following a College mistake when prop Rehann Baumann barged over under the poles, converted by Ginter Smuts for a 7-0 lead. College’s fullback Ruben van Blerk converted a penalty to narrow the gap.

It was then an EG Jansen show. Whenever College got close to the EG Jansen line, they were repelled and Jansen were back on attack. EG Jansen were quick to act on College mistakes and the missed tackles proved costly. Jansen scored another four tries before the break, all converted by Smuts to lead 35-3 at the break.

College tackling improved as they prevented EG Jansen from scoring more than two tries in the next quarter. Smuts missed one conversion to leave Jansen 47-3 in front going into the last quarter.

The second half was a better showing by College, giving away the two tries, but scoring one of their own by centre Ayanda Duma for the final loss of 8-47; but 5-12 in the second half.