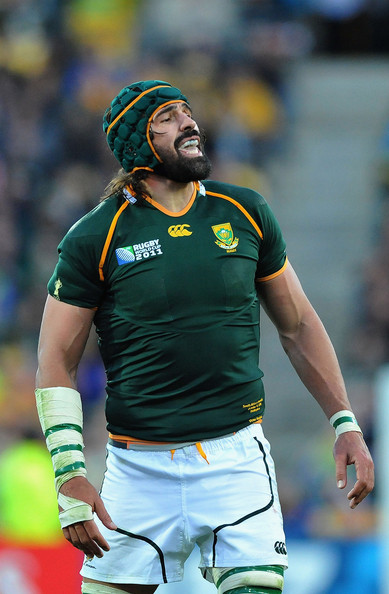 Victor Matfield of the Springboks yells to players during quarter final three of the 2011 IRB Rugby World Cup between South Africa and Australia at Wellington Regional Stadium on October 9, 2011 in Wellington, New Zealand. Photo by Gallo Images.

Morgan Piek – This latest news on  former Springbok Victor Matfield’s return to the rugby field is that he will be placed by either the Toyota Cheetahs or The Sharks. When I heard about this I could not believe what I was hearing. Apparently he will be placed in either of the two franchises in order to gain match fitness ahead of the three match Test series to be played between 9 and 23 June 2012. Meyer said that there is nobody else to captain South Africa for these three Test matches against old foe England. This is according a J.J. Harmse report in the Free State daily Die Volksblad.

Yesterday, Springbok coach Heyneke Meyer named his coaching staff and to nobody’s surprise, practically the entire Blue Bulls coaching staff was named as his assistants. With Meyer’s decision to bring back Victor Matfield and former Springbok half back Fourie du Preez I have to question his motives.

The first and biggest question on my mind is – Why don’t the Bulls want Matfield?

Nobody will ever argue the class and calibre of both Matfield and Du Preez; both were the finest players in their position in their day. Up until the 2011 IRB Rugby World Cup Matfield was regarded as the best lock ever and rightly so. Fourie du Preez on the other hand was long past his sell by due, mainly due to injury.

As it stands at the moment South Africa is blessed with a tremendous amount of world-class second-rowers, the likes of Andries Bekker, Steven Sykes, Eben Etzebeth, Flip van der Merwe, Juandré Kruger to name a few. To even suggest that Matfield and Du Preez will be Springboks and captain this year is a slap in any top level South African rugby players face. These youngsters works incredibly hard week-in week-out to don the famous Green-and-Gold. In my humble opinion it’s their time to shine now, why deny them their well deserved Springbok jerseys?

The three Toyota Cheetahs locks Izak van der Westhuizen, George Earle and Andries Ferreira have been three of the most consistent locks in Super Rugby this season and for any of them to be replaced by Victor Matfield would be a great injustice to them and their team.

The 110 Test capped veteran lock left a lasting legacy in South African and World Rugby unrivaled to none. Should he come out of retirement he mind just spoil that legacy.