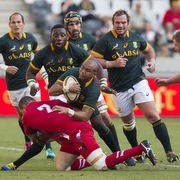 Meyer calls win over Wales his best yet

Springbok coach Heyneke Meyer on Saturday commended the support of the 25 500 strong Mbombela Stadium crowd in helping his team beat Wales 31-30 in the second Test of the Castle Lager Incoming Series, stating this win to be the best since he started coaching the Springboks in 2012.
“This was my best win yet with the team as these are the matches you coach for. We were down and almost out, but the team showed massive character and resolve to pull this one through,” Meyer said afterwards.

The Springboks were behind for 78 minutes of the match and only took the lead when Mornè Steyn converted a penalty try conceded by Wales that gave the Springboks the one point win.

“Wins like this stand out as this is where one’s coaching philosophy and team selection are put under massive pressure. We had to dig very deep against a very good team. It is always difficult playing a tough team in consecutive weeks and we needed some luck out there today. Credit to Wales, who played very well,” Meyer admitted.

The support from the crowd was massive, he said.

“No one left their seats, even when we were still ten points behind with six minutes to play and looked likely to lose. That support lifted the team in those last minutes of the match and I want to salute the crowd,” Meyer said.

According to the coach, the big difference between last weekend’s win in Durban and this one was the why they used their chances to score.

“In Durban we took every opportunity we had and scored. This weekend we did not and nearly paid the price. There is not much between the top sides in the world and I am very happy with the final result. It was an awesome test match,” he said.

Springbok captain, Victor Matfield, who became the most capped Springbok ever by taking the field in his 112th test match, blamed their poor exit play on the closeness of the result.

“Last week we could get out of our own half and apply pressure to Wales in their half. This time around we did not manage to do that and it gave them a lot of space to run at us.”

The character of the team shone through at the end, he felt.

“You need character to win the World Cup and we displayed some of that today. Our defence in last minutes to win the match was testimony of our will and mind set. We won this by coming back from behind. Last week we played well from the start, this time we had to come from behind. We were under massive pressure for most of the match, but came good when it counted.”

He praised the Welsh effort.

“With them leading, they had confidence and got stuck into us. We did not retaliate though, took the pressure well and responded at the right time.”