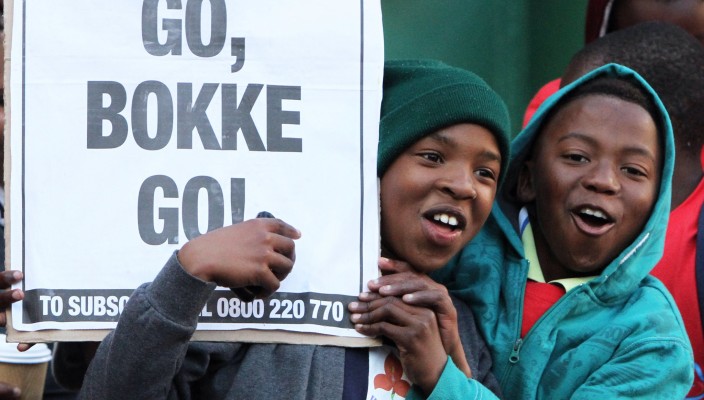 Springbok team effort and Ellis Park crowd made the difference 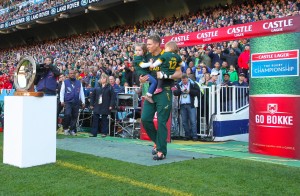 Springbok coach Heyneke Meyer described the 27-25 win over New Zealand in the final match of the Springboks Castle Lager Rugby Championship campaign as one of the best matches in which he had been involved. The support of the sell-out Ellis Park crowd also lifted the team’s effort, he said.

“I have been involved in rugby for almost 30 years and this support was unbelievable. We saw the crowd support on the way into the stadium and the national anthem was awesome. It was an unbelievable test match,” Meyer said.

“At home you have to pull these close matches through. New Zealand are a world-class outfit and really came back at us. We have played good rugby this year and at times in this match as well. In the Wellington match we had two chances five meters out to win it and today we used those chances.

“We are relieved that this is done now. The win was due. We appreciate the compliments the All Blacks gave us afterwards, we do respect each other.”

The Springboks edged out the Rugby Championship winners with a late penalty by replacement flyhalf Pat Lambie and Meyer admitted that he was not sure about the range of his player.

“Pat never answered me on how far he could kick when I asked him at the captain’s run, so I was not sure if he could kick those long ones. I am very pleased with Pat, he really worked hard. Handrè was awesome as well and we now have great depth at flyhalf, considering we have Morne Steyn and Johan Goosen as well.

Meyer admitted that he did not expect to see so many new faces in the third year of his reign, especially as the World Cup is a year away. “We had guys like Handrè, Cornal (Hendricks), Cobus (Reinach) and Oupa (Mohoje) out there today and they did very well, considering it is their first year of test rugby,” he said. “They will make it very hard for me to pick a final 31.”

“I was happy for Oupa. He played well and we needed that. He was great on defence and he stole a vital ball for us. He was awesome in the line-outs.”

Meyer had a special word of praise for Man of the Match Duane Vermeulen, who was only declared fit during the final warm-up before kick-off.

“He is an unbelievable warrior. He wasn’t sure if he could play at the captain’s run. We decided to wait till warm-up. I asked him for 80 minutes and I got that.”

“This was an amazing atmosphere and reminded me of my first test against New Zealand in 2004,” he said. “We took 15 minutes longer to get here because of the traffic. The passion the crowd showed was awesome so we are so pleased to give our fans this win.”

He had a special word of praise for New Zealand.

“The last couple of matches we have played have been colossal,” said De Villiers. “We are bringing the best out of each other. The brand of rugby we play is also great when we meet. We respect each other and it makes rugby special. We said all year that we are a good enough team to beat the no 1 side in the world. We did that. We have to look at where we can improve.

“Now the November tour looms in conditions similar to the World Cup next year. So we cannot take two steps back now.”

“There was no doubt, I asked Pat if it was in his range, he said yes. So it was the right decision. We have trust in each other. We have guys in the team that can perform under pressure. In Wellington we could not finish, this time we could.”