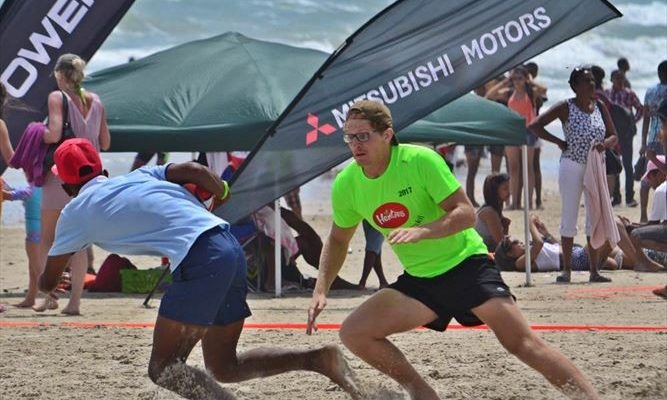 Starting way back in 1978 on a beach in Stilbaai when a local group of holiday makers in the small coastal town got together to formalise all the social games that used to take place into a one-off tournament, Mitsubishi Motors South Africa brings back the Hot Summer of Touch.

This hugely popular game of Touch Rugby is back on the coastline of the Southern Cape this December and is again presented by Mitsubishi Motors as official vehicle sponsor, making it a perfect fit thanks to the family lifestyle element of Mitsubishi’s modern fleet of activity vehicles such as the ASX, Outlander and Triton, not to mention the popular Pajero and Pajero Sport. The Hot Summer of Touch sponsorship is also part of Mitsubishi Motors’ involvement with other great rugby formats such as the Rugby 7s and highflyers involved in rugby development.

The Hot Summer of Touch 2018 celebrates its 18th year on the Southern Cape’s beaches and with Mitsubishi Motors as official vehicle supplier for the 8th year, the action will be hotter than ever.

With over 400 teams taking part in 2017, this year’s series is expected to be even bigger and thousands of spectators are expected to flock down to enjoy the hottest action this Summer.

This year the series will have 6 segments in the Hot Summer of Touch series:

The series has once again been set aligned to draw mass participation, with a second tier Challenger Section being added to the Pro Series, which is allowing more of an opportunity for the general public in the open and junior sections.

The Pro-Series will showcase the brightest Touch Rugby talent in the country with the top 8 teams cracking the whip against each other for the title of “Kings of the Beach”.

Thanks to Mitsubishi Motors South Africa and other sponsors, players and spectators alike can expect much more than just a Touch Rugby tournament, with entertainment and laughs provided by celebrity MC Deon Bing and other well-known voices and faces in the entertainment and sporting fields.

The 2018 series will also include Miss Touchies and Mr Six Pack competitions, not to mention the most exciting and competitive Touch Rugby seen anywhere in the world.

The series dates and venues are as follows:

Teams consist of a maximum of 8 players and entry fee is R360 per team.