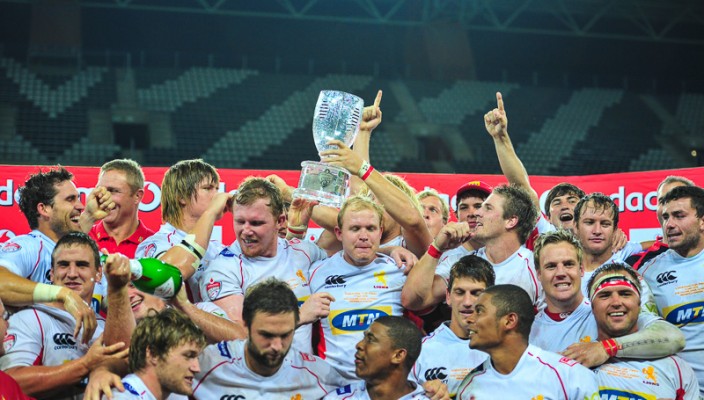 The MTN Golden Lions won the Vodacom Cup for a record fifth time when they beat the Steval Pumas by 42-28 in a highly entertaining final at the Mbombela Stadium in Nelspruit on Friday evening.

It was the second successive season that the visiting team won the final after DHL Western Province beat GWK Griquas in Kimberley last year.

By winning the Vodacom Cup for the fifth time, the MTN Golden Lions are now the most successful team in the 16 year history of this competition. But it took them some time to do this – their last series success came in 2004.

The team from Johannesburg could not even reach the final since their last success nine years ago. At one stage this season it looked like it would be another one of missed opportunities for the MTN Golden Lions – they lost three of their first four pool matches, but they turned their season around and the final victory was their sixth successive win of 2013.

The Steval Pumas, the top team in the North Section and one of the most consistent in 2013, featured in their first final at this level, but sadly they could not cap a good season with a great finish.

The team from Mpumalanga did receive a little bit of a consolation prize when 11 of their players were included in the SA President’s XV squad for next month’s IRB Tblisi Cup, while their coach, Jimmy Stonehouse, will take charge of the team in Georgia.

But it would have been bittersweet for the Steval Pumas after a disappointing final where both sides scored three tries apiece.

In the end, however, the boot of MTN Golden Lions flyhalf Marnitz Boshoff, who slotted all 10 of his kicks at goal, was the difference. He contributed 27 of his team’s points and made sure the Pumas paid dearly for their ill-discipline, especially in the second half.

The Steval Pumas started very well and were ahead by 10-0 early in the match, with Stefan Watermeyer (centre) going over in the corner for their first try. Fullback Coenie van Wyk scored a great try from a deft grubber by Carl Bezuidenhout (flyhalf) later in the first half.

But the MTN Golden Lions never gave up. At the break, the visitors were ahead by 23-20, thanks to two first-half tries by Anthony Volmink (wing) and Warren Whiteley (No 8 and captain).

Where the first half was more open, both sides knuckled down in the second stanza, but this played into the hands of the Golden Lions as they forced mistakes from the home team, which Boshoff duly converted into points.

Flanker Warwick Tecklenburg’s try in the 71st minute put the result beyond any doubt for the visitors, but Jerome Pretorius (replacement centre) got the home team’s third try before Boshoff ended off a fine display with a great drop-goal in the 79th minute.

Volmink finished the season as the top try scorer in the Vodacom Cup with 13 five-pointers. Steval Pumas speedster Rosco Speckman’s 11 tries were next best in 2013.

The Sharks XV’s Fred Zeilinga finished as top scorer with 154 points, while the Steval Pumas’ Carl Bezuidenhout ended second with 128. They were the only players who scored more than 100 points this season. Boshoff’s 27-point haul in the final saw him finish the season third on the list with 96 points.

For a match breakdown of the Vodacom Cup final, click here.

(50 or more points scored in the season)