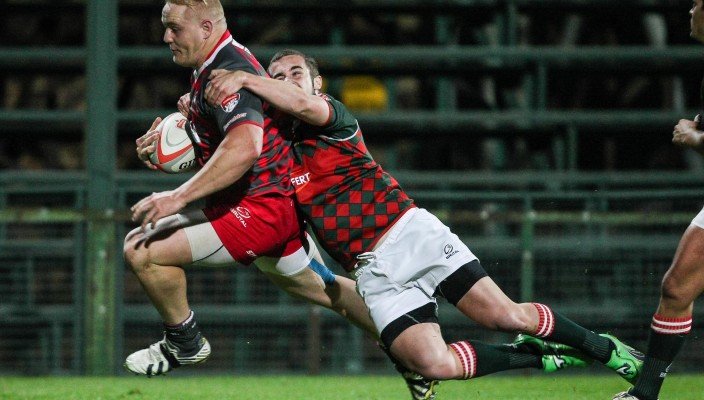 The Steval Pumas will host the EP Kings at the Mbombela Stadium in Nelspruit next weekend, while the defending Vodacom Cup champions, DHL Western Province, have to travel to Ellis Park in Johannesburg to face the MTN Golden Lions.

At this stage, both semi-finals are scheduled for next Saturday. The final kick-off times will be confirmed early in the week.

MTN Golden Lions flyhalf Boshoff kicked 27 points as his team beat the Sharks XV, winners of the South Section, by 42-25 at Kings Park in Durban on Friday afternoon.

The KwaZulu-Natalians were strengthened by two Springbok loose forwards in Willem Alberts and Ryan Kankowski, but in the end it didn’t matter as the team from Johannesburg did the damage by scoring three tries to one.

The match started with Boshoff and and his Sharks XV counterpart Fred Zeilinga trading penalty goals. The visitors led 18-9 shortly before the break, but their lead was cut to 18-16 when Sizo Maseko scored the first try of the match for the Durbanites.

But the MTN Golden Lions found their groove in the second half as Anthony Volmink, Chrysander Botha and Deon van Rensburg all crossed for tries, while Boshoff kept on slotting his kicks at goal.

In Nelspruit, Specman scored a hat-trick of tries as the Steval Pumas beat the ICBC Pampas XV, Vodacom Cup champions in 2011, by 44-37 in a try-fest at the Mbombela Stadium on Friday evening.

Specman’s third try, five minutes from the end of the match, gave the team from Mpumalanga some breathing space at 44-30, and the Argentineans duly crossed for their fifth try right at the death.

The match was pretty evenly matched as both sides scored five tries each, but the big difference was Carl Bezuidenhout, who kicked 19 points for a total tally of 24 as the Pampas’ kicker, Santiago Gonzalez Iglesias, missed 13 points through fluffed kicks at goal.

In Cape Town on Saturday, Kolbe – who has played for the Springbok Sevens team and was recently picked at fullback for the SA Under-20s – scored both DHL Western Province’s tries as they had to dig deep to beat GWK Griquas by 21-10 at DHL Newlands.

However, it was Kolbe’s second try, a few minutes into the second half, gave the home team a shot in the arm as it started a scoring sequence of 11 points in 10 minutes, which proved to be the difference in the end.

And finally, in Pretoria it was EP Kings loosehead prop Gqoboka who broke the hearts of the Vodacom Blue Bulls with the winning try in injury time of their quarter-final at Loftus Versfeld. The visitors won 34-31.

Gqoboka’s try was the Kings’ third in the last eight minutes of the match, which set up an unlikely victory. With less than 10 minutes left on the clock, the home team were leading by 31-13 and seemingly cruising towards their umpteenth Vodacom Cup semi-final.

But the EP Kings’ Mpho Mbiyozo, Dalton Davis and Gqoboka had other plans as they all crossed for late tries – all of them converted by Wesley Dunlop – to cause probably the biggest shock of the weekend.

All the scorers (click on the link for the match breakdown):