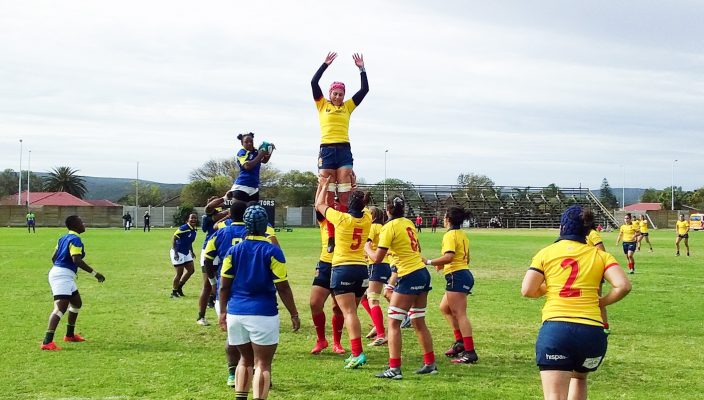 SA Select Women’s coach Eddie Myners was disappointed with his team’s 17-5 defeat against the Spain Invitational XV at the WJ de Wet Stadium in Despatch on Saturday, but he focused on the positives after a number of young players put up their hands at this level.

The Spain Invitational XV put their powerful forwards and effective scrums to good use in the first half, which saw them score three tries to none by the SA Select Women for an encouraging 17-0 lead.

The hosts tightened up their defence and stepped up their attack after the break and did well to work their way close to the tryline on a few occasions, and their efforts paid off with a late try, which proved to be the only points in the half.

“Our goal going into the game was to see how the young players would respond to the challenge of playing at this level, and in that regard I am happy,” said Myners.

“Obviously one will never be pleased with a defeat, but we ticked the boxes we wanted to in this game, and I think the players passed the test.”

He added: “There are a lot of positives we can take from the match, especially some of the individual performances, and we also looked good when we had ball in hand.

“Obviously there are areas we need to work on, but I think the more time we have to work with the players, especially in terms of their conditioning, the more they will improve.”

Myners also gave them a good idea of what to expect in the Test match between the Springbok Women and Spain in Despatch next week Saturday.

“We always knew that Spain had a good scrum and they showed that again today,” said Myners.

“This certainly gave us a general idea of what they are going to bring to the table next week.”

Spain Invitational XV winger Uribarri Barrutieta opened up the scoring in the 10th minute as she capitalised on an overlap out wide after steady forward pressure.

They built on this with hard running on attack, and made their way close to the tryline twice more, but they were denied by timely turnovers by the hosts.

The Spain Invitational XV’s determined efforts, however, paid off once again in the 25th minute with Laura Delagado (prop) scoring after a series of pick-and-go’s, and they added their third try shortly before halftime as María Calvo (No 8) gathered the ball from the base of a forceful scrum to touch down. The successful conversion pushed them 17-0 ahead.

In stark contrast to the visitors, the SA Select Women created chances, but mistakes at crucial times in the opposition’s half denied them from capitalising on those visits.

The SA Select Women showed their determination to force their way back into the match in the second half as they retained possession and ran hard on attack, and they managed to camp in the visitors’ half for most of the second stanza. But handing errors combined with the water-tight Spain Invitational XV defence cost them from turning the pressure into points.

Their efforts, however, finally paid off in the dying seconds as Piwokuhle Nyanda (winger) dashed through a gap and used her raw pace to out-run a defender, which saw them go down 17-5.