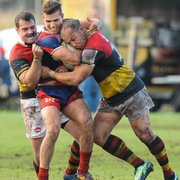 SOUTH Africa’s oldest club, Hamiltons, will represent Western Province at the 2014 Cell C Community Cup after their two-horse race with Durbanville-Bellville ended on Wednesday night when Durbell lost to champions Maties in their final match of the Super League season.

With Durbell trailing Hamiltons by three log points going into the midweek match against the Stellenbosch students, their defeat means that Hammies’ final game this weekend, away to bottom-of-the-log Helderberg, is of academic interest only.

Hamiltons, the 2009 national club champions, will now join Griquas winners Sishen, Mpumalanga champions Shumba Ferros, one wild card and either Rustenburg Impala or Vaal Reefs in Pool D of SARU’s flagship club tournament, which kicks off on 8 March 2014 with 52 matches to be played across the length and breadth of the country.

“We’re elated and there’s an amazing buzz going around the club,” said Hamiltons coach Anton Moolman. “The hard work starts now but I’m very proud of the guys and the character they’ve shown this season.”

With Hamiltons and Durbell – who finished fifth in the inaugural Community Cup earlier this year – running neck and neck for most of the WP Super League season, it was Hammies’ 20-16 victory over Maties a fortnight ago, together with Durbell’s 17-17 draw against lowly Bellville on the same day, which finally swung the balance in favour of the Green Point-based side.

The Griffons First League final, between champions Welkom Rovers and Welkom, will take place on Monday 9 September, with the winner qualifying automatically.

Rustenburg Impala, who finished fourth in the 2013 Community Cup, will play Vaal Reefs in an eliminator later this month, to decide who will represent the Leopards at the tournament.

And Border’s qualifier will be one of defending champions Old Selbornian, Buffalo or East London Police, after all three won through to the Super League semi-finals, where they will be joined by the University of Fort Hare. Both semi-finals will take place at the Buffalo City Stadium in East London on Wednesday, with Fort Hare up against Police, and Old Boys, as they are better known, playing Buffs.

Elsewhere, Pacaltsdorp Evergreens will host Bridgton and Mossel Bay Barbarians will be at home to fierce rivals Groot-Brak in the SWD Premier League semi-finals on 14 September, with the two winners playing for a Community Cup slot on 28 September when the Cup final takes place at Outeniqua Park in George.

The final rounds of the Boland Premier League will resume on 14 September, with 2013 Community Cup wild cards Roses United holding a slender five-point lead over Wesbank with four rounds remaining – one of which pits the two great rivals together in Malmesbury.

Once all provincial leagues are completed, SARU’s Games and Policies Committee will choose the five wild cards to join the 15 automatic qualifiers in the 2014 Community Cup.

This year, all provincial unions have been requested to nominate their second-best non-university clubs, based on the season’s results. Tournament rules state that none of the five wild cards that took part in the 2013 Community Cup can be invited back for 2014, provided they win their respective provincial league and therefore return as champions – as Bloemfontein Crusaders have done and which Roses United might yet do.

The tournament rules also state that no teams that took part in the 2013 Community Cup as their province’s top-ranked open club can be invited back as a wild card in 2014, having lost their number-one position.

To ensure that all provincial unions are able to at least nominate a wild card, those provinces whose second-best open clubs are ineligible, according to the tournament rules, have been asked to nominate their highest-placed eligible open club, based on final log positions.

SARU’s Games & Policies Committee will then weigh up the merits of all nominated clubs next month before announcing which five clubs will take part in 2014.

The curtain-raisers see Pukke play Tukkies in the under-21 final at 12h00, and Pukke up against UJ in the 2nd XV final at 14h00. The 3rd XV and under-19 finals will take place on the University B field at 12h00 and 14h00 respectively.