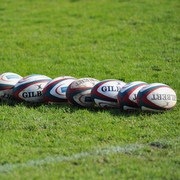 ALL fifteen automatic qualifiers for next year’s Cell C Community Cup are now confirmed after a dramatic weekend that saw a last-gasp try decide the tussle for the final place.

The Karoo town of Oudtshoorn will be part of the Community Cup roadshow next year after Bridgton shocked favourites Mossel Bay Barbarians 25-24 in the SWD Premier League final in front of a large crowd at Outeniqua Park in George.

Bridgton, who finished fourth in the league, ran into form at just the right time, beating defending champions Pacaltsdorp Evergreens in the semi-finals before surging to the title in front of thousands of their travelling supporters.

Bridgton’s never-say-die attitude paid off when, trailing 24-20 with 90 seconds remaining and having conceded a penalty, they turned over possession near their own line before embarking on one final attack. The movement, which went through more than 20 phases, resulted in a try in the corner after the hooter to seal Barbarians’ fate.

And Roses United became the second wild card team from 2013 – the other being Bloemfontein Crusaders – to return to the 2014 tournament on merit when they won the Boland Premier League with a match to spare following an away victory over Ceres.

The result means that the last match of the year – and indeed the South African club season – against main rivals Wesbank in Malmesbury this Saturday is of academic interest only, although the fixture remains one of the biggest derbies in SA club rugby and is sure to draw a large crowd to the Swartland town.

There are four newcomers – Ferros, Bridgton, Hamiltons and Centurion.

SARU’s Games and Policies Committee will choose five wild cards to complete the 20-team field later this month, from the ranks of the second-best eligible open clubs in each province, based on final log position. The 13 clubs officially nominated by their respective unions, from which the final five will come, are: