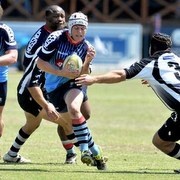 IT will be Rovers vs Rovers in the 2014 Cell C Community Cup after Welkom Rovers retained their Griffons First League title to become the 10th team to qualify for SARU’s flagship tournament for open clubs.

In a nailbiting final played at the Griffons Stadium on Monday night, Rovers beat bitter rivals Welkom 14-13 thanks to two drop goals from flyhalf Ryno Venter.

Rovers, who finished 10th in the inaugural Community Cup earlier this year, will join their namesakes and 2013 runners-up Jonsson College Rovers of Durban in Pool B, together with Golden Lions champions Roodepoort, Free State’s top open club, Bloemfontein Crusaders, and one wild card.

With the scores level at full-time, neither team able to score in extra time and both sides having grabbed two tries, Rovers were awarded the historic trophy – first played for in 1890 – by virtue of having scored more tries than Collegians during the tournament.

The five remaining automatic slots will be decided in the next two weeks. Once all provincial leagues are completed, SARU will choose five wild cards to complete the 20-team field from the ranks of the second-best eligible open clubs in each province, based on final log position.

The final rounds of the Boland Premier League resume on Saturday, with 2013 Community Cup wild cards Roses United holding a slender five-point lead over Wesbank with four rounds remaining – one of which sees the two giants of Boland club rugby facing each other in Malmesbury. Defending champions Villagers Worcester are still in the running in third place, and will be desperate to grab a full haul of five points when they host Robertson at Boland Park on Saturday in one of the great derbies in South African club rugby.

Border’s qualifier will be one of defending champions Old Selbornian, Buffalo or East London Police, who are joined by Fort Hare University in the Premier League semi-finals taking place on Wednesday at East London’s Buffalo City Stadium. Fort Hare are up against Police, with Old Boys playing Buffs. The final is scheduled for 28 September.

And Rustenburg Impala, who finished fourth in the 2013 Community Cup, will play Vaal Reefs in an eliminator on 21 September to decide who will represent the Leopards at the tournament.