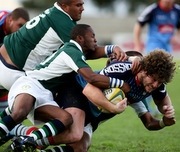 April 18, 2014
A new Cell C Community Cup champion will be crowned on Monday after defending champions GAP Management Despatch were knocked out of the final stages of the competition by Roodepoort on the opening day’s play of the Easter Playoffs at Outeniqua Park in George on Thursday.
The tournament started with the upset as GAP Management Despatch went down 26-20 against Roodepoort, but this was followed by a series of convincing victories by Jonsson College Rovers, Rustenburg Impala and Hamiltons.

The 2013 runners-up Jonsson College Rovers outplayed Kempston Old Selbornians 36-13 to stamp their authority early on in the competition, while Rustenburg Impala produced a solid performance against Roses United for the biggest win of the day, a fantastic 66-13 victory.

Hamiltons followed in their footsteps in the final match of the day as they registered an emphatic 40-10 victory against Refreshhh! Centurion.

In Saturday’s second round, Roses United will meet Kempston Old Selbornians and Refreshhh! Centurion will take on GAP Management Despatch, while the semifinals will be contested between Rustenburg Impala and Jonsson College Rovers, and Hamiltons Roodepoort respectively.

Defending Cell C Community Cup champions GAP Management Despatch stuttered in their opening match of the tournament after battling to contain a dominant Roodepoort side. The Johannesburg-based team applied pressure on attack early on and earned the rewards with three first-half tries.

Roodepoort prop Mauritz Vermeulen opened the scoring in the fifth minute, but this was followed by a few tight exchanges between the sides. Roodepoort, however, found their rhythm in the second quarter, which resulted in tries for wing Lesego Malau and Jaun Shaw and a penalty for flyhalf Hendrik Oosthuizen.

In return Gap Management Despatch slotted over two penalties in the first half, and found themselves trailing 20-6 at the break.

The defending champions, however, bounced back strongly in the second half by reducing their errors on attack and stringing together phases, which allowed flyhalf Monty Dumond and replacement back Virgil Russel to cross the tryline, while Roodepoort kicked only a penalty. This comeback allowed Gap Management Despatch to reduce the gap to 23-20 with eight minutes to go.

But hopes of a last gasp victory were dashed as Oosthuizen slotted over his third penalty with four minutes left on the clock, which pushed Roodepoort six points ahead – a lead which they defended successfully.

Cell C Community Cup 2013 runners up Jonsson College Rovers started off their Easter Playoff campaign strongly by registering a convincing 36-13 victory against newcomers Kempston Old Selbornians. This victory reaffirmed their status as one of the favourites in the tournament for the second year running.

Jonsson College Rovers flank Jean Pretorius was in fine form as he scored a hat-trick of tries, two of which were within six minutes early in the second half, to put his team on the front foot. In total the KwaZulu-Natal side scored five tries, of which two were scored in the first 20 minutes, while flyhalf Jeandre Small kicked a penalty shortly before half time to hand them a 17-3 lead.

Pretorius’ tries in the third quarter pushed the team further ahead on the scoreboard, while simultaneously piling pressure on Kempston Old Selbornians. The Border club, however, hit back in the last 20 minutes with tries by prop Dylan Pieterse and flank Marc Hammond to push their score into double figures and salvage some pride.

Four of Rustenburg Impala’s tries were scored in the first quarter in a fine display of attacking rugby, and they supported this with a fifth try before the break. Former Griquas and Western Province flyhalf Naas Olivier, meanwhile, kept the scoreboard ticking as he slotted over four conversions and one penalty. In stark contrast Roses United were forced to settle for a single penalty by Ryan Julies, leaving them 36-3 behind at half time.

Rustenburg Impala wasted no time building on their strong first half after the break and scored their first five-pointer five minutes into the half thanks to Wendal Wehr. Roses United tried hard to fight their way back into the match and made a few fantastic line breaks, but mistakes at crucial times cost them dearly and allowed them to cross the chalk only once.

Hamiltons made their presence felt on debut at the Cell C Community Cup Easter Playoffs by overpowering Refreshhh! Centurion 40-10 in the closing match of the day.

The Western Province club used their possession well by stringing together phases on attack, which resulted in Refreshhh! Centurion defending for long periods of time, and they supported this with a solid defensive effort. They also did well to capitalise on the opposition’s mistakes.

However, had it not been for a few turnovers at crucial times Hamiltons would have registered an even bigger victory, but there is no doubt they will pay special attention to this aspect of their game in their semifinal on Saturday.

So dominant were the Cape side, they scored five tries, to only one by Refreshhh! Centurion who managed to cross the tryline only once in the dying minutes of the match to add to a penalty by Steven Moir for their disappointing 10 points. They will, however, take some encouragement from the fact that they put together a few good phases on attack with ball in hand, but similarly to Roses United, mistakes cost them in the end.