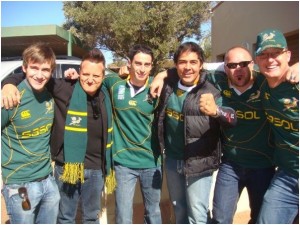 The 2011 season promises to be one of the most enthralling in the professional era predicted Jurie Roux, chief executive officer of the South African Rugby Union (SARU), when the Union released the 2011 fixture list on Wednesday.

The Springboks’ campaign to retain the Rugby World Cup will dominate the second part of the year but the inaugural season of a new-look Vodacom Super Rugby competition, new sponsorships and a newly restructured operational organisation make it a watershed year for South African rugby.

“This is a very exciting season for South African rugby as well as for SARU as an organisation,” said Roux.

“The focus will be very much taken up by ensuring the Springboks are as well prepared and focused as they can be for the Rugby World Cup in New Zealand in September and October. Planning is already well advanced and we will be announcing a core squad of contracted Springboks in the near future.

“We will also be shortly announcing a new sponsor for the Springboks, following the expiry of our contract with our very good friends at Sasol and, of course, Vodacom Super Rugby has evolved into a new format.”

The new format features more matches with more opportunities for emerging talent with an increase in matches 94 to 125 in an expanded season that concludes on July 9.

There will be 20 local derbies in each nation with national bragging rights up for grabs as well a guaranteed place in the expanded finals series for whichever team finishes top of its own national conference.

“Our research at SANZAR has undoubtedly proved that the live supporter and television audience both want more derby matches and we’ll be giving them that this season,” said Roux. “But we’ll also be retaining the strong international component that makes Vodacom Super Rugby such an outstanding tournament.”

Meanwhile Roux, who assumed the role as SARU CEO in October, will also lead the completion of the restructuring of the organisation following the dissolving of the old commercial arm (SA Rugby (Pty) Ltd) into SARU, which had continued to be responsible for rugby’s non-commercial interests.

“The convergence of the two arms has necessitated a long, hard look at how we do business and how we organise ourselves,” he said. “But it has also presented us with great opportunities.

“As a result we will be presenting a redefined and freshly focused vision for approval to the Executive Committee in due course, as well as realigning our operations to deliver on that vision. We will spell out that vision to our supporters and stakeholders and we will expect to be measured against what we say.”

The Rugby World Cup means there no tours this season and the shortened Tri-Nations tournament starts in July with the Springboks meeting the Wallabies in Sydney on July 23 before meeting the All Blacks one week later in Wellington, where the team will play the opening two matches of the Rugby World Cup.

That kicks of on September 9, with the Springboks playing the first of their four Pool D matches against Wales. They also face Fiji in Wellington before matches against Namibia and Samoa in North Harbour.

The South African season concludes on October 29 – one week after the Rugby World Cup final – with the final of the Absa Currie Cup.