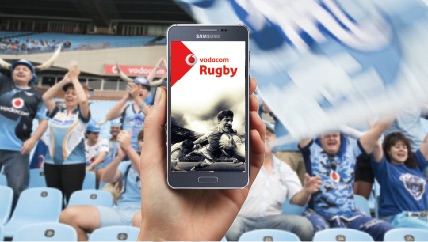 May 29 • General News, Super Rugby • 1323 Views • No Comments on New Vodacom Wi-Fi solution to combine the best of home viewing with the live big game experience

Large crowds at sports matches can mean frustratingly slow uploads of status updates and selfies, and make it all-but-impossible to view the video instant replays that you get when watching the big game at home. Vodacom’s latest full-stadium Wi-Fi solution is an African first and heralds the introduction of the smart stadium where connectivity issues will be a thing of the past and fans get the best of both worlds.

Rugby fans visiting Loftus Versfeld will be able to connect to Vodacom’s new high-density Wi-Fi network, with faster data connectivity than ever before. The solution is the first step in making Loftus Versfeld Africa’s first truly ‘smart’ stadium.

“As the home of the Vodacom Blue Bulls and one of the most visited stadiums in South Africa, Loftus Versfeld was the obvious stadium for us to launch this project.  Our engineers have been hard at work, installing more than 40 km of fibre and more than 400 Wi-Fi access points. We tested the service for the first time at the Bulls-Lions match on 2 May and were incredibly pleased with the result,” said Andries Delport, Vodacom’s Chief Technology Officer.

The key to the success of Vodacom’s Wi-Fi at Loftus Versfeld is the commercial implementation of EAP-SIM technology. This is the first time this technology, which stands for Extensible Authentication Protocol, will be employed in South Africa. It enables a seamless switch between radio bearers (4G, 3G, 2G and Wi-Fi), meaning that a cellphone or tablet will connect to whichever bearer has the best connection, ensuring the fastest possible data access. EAP-SIM also means that during a Wi-Fi data session it will still be possible to receive voice calls.

“An EAP-SIM network offers real benefits to our customers. On top of better speeds there’s no need to buy additional Wi-Fi bundles to connect to the network. Instead, data will be drawn directly from a customer’s existing data allocation, making the connection and usage process simple. Non-Vodacom customers will also be able to buy Wi-Fi bundles to gain access,” said Delport.

Michael Kämper, Director Mobility at Cisco Services EMEAR, had this to say about the project:

As the home of one of the most passionate rugby franchises in South Africa, the Blue Bulls are always exploring innovative ways to bring the ultimate gaming experience to their fans. More than just a solution to congestion, Barend van Graan, CEO of the Blue Bulls Company sees the solution as the first step to creating a next generation smart stadium that can enrich fan experience:

“At the moment, speeds in the majority of stadiums are not fast enough to stream video when a match is on and the network is congested. This can make watching content extremely frustrating. In some cases people would rather stay at home to watch the game on TV where they can easily view replays, see different camera angles or even catch games being played at other stadiums. Our new Wi-Fi network will change that. The ability to watch video content on their smartphones will give fans the opportunity to enjoy the vibe of being at a big game while at the same time enjoying the benefits that come from watching at home.

“One of the ways we plan to further add value to the stadium experience is via the Vodacom Rugby App. On top of being able to access exclusive content, location-based services will mean that in the future users will be able to access stadium specific promotions, have food and drinks delivered directly to their seats and even find out which bathrooms have less of a queue.”

Vodacom is currently in talks with other stadiums and public spaces, like shopping malls, to roll out the solution.