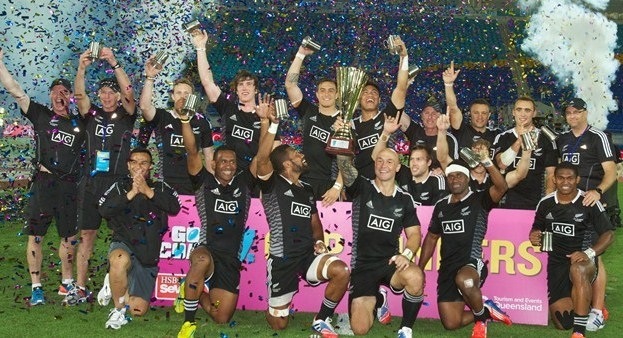 Debutant Ambrose Curtis scored two tries as New Zealand came from behind to win the 2013 Gold Coast Sevens, beating hosts Australia 40-19 in the final to get the defence of their HSBC Sevens World Series title off to a flying start.
Trailing 12-0, it looked as though New Zealand could be set for a third successive Cup final defeat at Skilled Park, but Curtis (2), Tomasi Cama, David Raikuna, Waisake Naholo and Joe Webber ensured the win against a tiring Australia.
The hosts were made to work hard in a breathless semi final, eventually coming out 24-19 victors thanks to a Jesse Parahi try deep into the second half of sudden-death extra time.

In the semi finals Gordon Tietjens’ side continued their impressive Gold Coast Sevens campaign by beating a spirited England 14-5 to book their place in the Cup final at the opening round of the Series.

England finished third after an impressive 47-0 win over South Africa with Phil Burgess, James Rodwell and Dan Bibby both scoring twice. Earlier Simon Amor’s side had beaten former coach Ben Ryan’s Fiji 26-12 in the quarter finals before Mike Ellery scored the first points of the weekend against New Zealand in their semi final defeat.

In their respective quarter-finals, last year’s IRB Sevens Player of the Year Mikkelson scored a hat-trick for New Zealand in their 40-0 win against Samoa, before Australia beat Kenya 24-12 with Shannon Walker, Ed Jenkins, Sean McMahon and Nick Malouf scoring the tries.

Having lost to former side England in the Cup quarter final, Ben Ryan guided his Fiji side to a Plate victory after beating Kenya 36-0 thanks to tries from Samisoni Virivri, Waisea Nacuqu, Benito Masilevu (2), Ilai Tinai and Sakiusa Nadruku.
In the semi finals the two-time defending Gold Coast Sevens champions proved too strong for Samoa, winning 31-26 with five different player scoring.

Shield success for Hawkins and USA