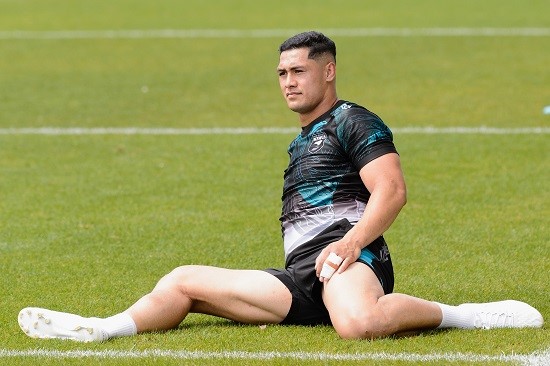 New Zealand Rugby and the Blues have confirmed Roger Tuivasa-Sheck has signed a two-year contract that will also see him link with Auckland through to the end of 2023.

The announcement comes a decade after Tuivasa-Sheck last played rugby union, a sport the 27-year-old confirmed he had always intended to play again following his illustrious rugby league career.

“It has been a dream of mine for a long time to one day play rugby union again, to get this opportunity with New Zealand Rugby, the Blues and Auckland is exciting. The timing feels right to do this now. That said, I have a big year ahead of me and will turn my attention to this opportunity later in the year.”

Tuivasa-Sheck has become one of the biggest names in rugby league since embarking on a professional sports career in 2012, one year after playing for the New Zealand Secondary Schools rugby team alongside current All Blacks Patrick Tuipulotu, Ardie Savea, and Ngani Laumape.

The Samoan-born Aucklander joined the New Zealand Warriors in 2016 and will play out his final season with the club in 2021. His success in rugby league has included being judged as the best player in the National Rugby League (NRL) when he was awarded the Dally-M Medal in 2018.

He will link up with Auckland later in the year and kick off his Sky Super Rugby career with the Blues in 2022.

New Zealand Rugby General Manager of Professional Rugby and Performance Chris Lendrum said Tuivasa-Sheck’s return to rugby is a major coup and would be welcomed by players and fans alike.

“It’s hugely exciting for everyone in rugby to have Roger back playing rugby union. He is a highly talented athlete who has achieved a huge amount in rugby league, but, equally, has proven himself as a leader on and off the field and an outstanding role model.

“Roger has some goals he wants to achieve in rugby, and we are thrilled to be able to give him the opportunity to chase those goals.”

Tuivasa-Sheck spent his formative rugby years playing for the Otahuhu College 1st XV and went on to play for the Blues development squad as a teenager, so is a natural fit for his home Super Rugby club and Provincial Union.

Blues Chief Executive Andrew Hore said:
“The Blues are thrilled to have Roger wearing our colours from next year.

His roots were in rugby and we know he will be an exceptional player.

More importantly he is an outstanding leader who will embrace the links we are creating in the wider community. Roger will be a superb contributor to our club, and we hope his fans will follow him to Eden Park next season.”

Auckland Rugby Chief Executive Jarrod Bear said:
“This is an exciting opportunity for Roger, and Auckland Rugby’s role, as it is with all our players, is to provide the best support and pathway for Roger to achieve his aspirations.”