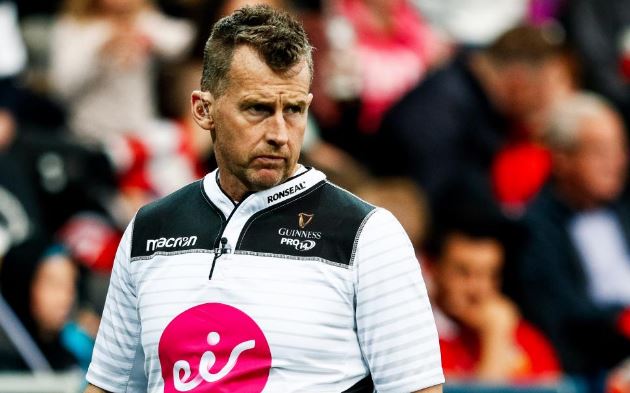 Nigel Owens has been appointed to referee the Guinness PRO14 Final between Glasgow Warriors and Leinster Rugby at Glasgow’s Celtic Park this Saturday
(KO: 18.30).

The Welsh official will be assisted by John Lacey (IRFU) and Mike Adamson (SRU) as he holds the whistle for his 180th appearance in the Championship. Ian Davies (WRU) has been appointed as Television Match Official.

Owens, who is the most experienced official in the Guinness PRO14, takes charge of his sixth decider and will also be refereeing the 13th major final of his career having also been appointed to six European Cup Finals and the 2015 Rugby World Cup Final.

The decision to appoint the officials was based primarily on performance and capability. Owens, Lacey and Adamson have been the best performing match officials during the 2018/19 season with all three taking charge of games in this season’s Guinness PRO14 Final Series.

Greg Garner, Elite Referee Manager for PRO14 Rugby, was delighted to share the news of the appointments:“Early in the year the board of Celtic Rugby gave myself and the union referee managers the backing to ensure we appointed the best match officials for the biggest games of the season and I’m very pleased that our three best referees will be on the pitch at Celtic Park.

“I would like to congratulate all of our primary team. Nigel Owens has tremendous experience and it is a great credit to him to receive a 13th appointment to a major rugby final. Supporting Nigel, we have John Lacey, an international referee since 2010 who has been appointed at World Cup level and will be signing off on his career on one of the biggest occasions after tremendous service to the tournament and the sport.

“I’m particularly satisfied that Mike Adamson has made the selection process easy with the standard of his performances this year. Last weekend Mike was the first Scottish official to referee a knock-out game in the Championship since 2001 and we were really pleased with his handling of Leinster and Munster – a game that was played at Test-match standard.

“Mike’s appointment is a great indication of the younger refereeing talent we have in the Guinness PRO14 along with Andrew Brace, Ben Whitehouse, Dan Jones and Frank Murphy all progressing very well. It’s also a very positive sign for our Scottish match officials, too.

“I would like to wish all three the very best for Saturday’s game between Glasgow Warriors and Leinster and extend our thanks to our match official sponsors, eir sport, Big Red Cloud, Ronseal and Macron. Their support has allowed us to further invest in our match official programme which has already been greatly enhanced this season and will be upgraded yet again in the coming months.”