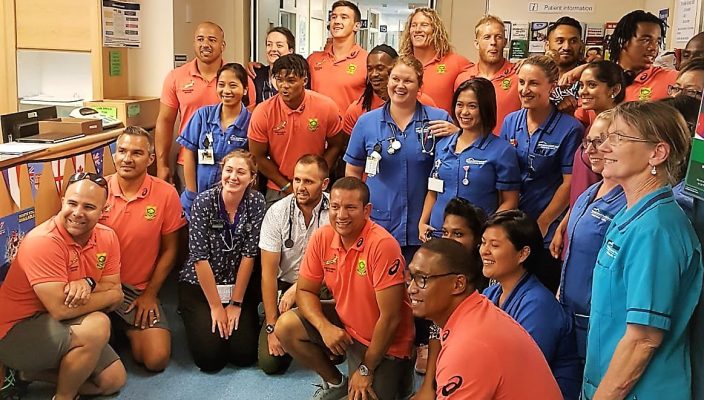 The Springbok Sevens team will make no excuses about travel times, time zones or personal discomfort during their stay in Hamilton for the HSBC New Zealand Sevens tournament.

Blitzbok playmaker Stedman Gans reiterated this as the squad continued with their preparation for the third tournament of the HSBC World Rugby Sevens Series, at FMH Stadium Waikato on 26 and 27 January.

The Blitzboks travelled to the Waikato area from Cape Town on Saturday, connecting at Johannesburg and Sydney to Auckland, followed by a bus drive south to Hamilton. The team also encountered an 11 hour time switch upon arrival in New Zealand, but Gans, who will be playing in his 12th tournament for South Africa, said those factors will not part of the Blitzboks’ mind-set this week.

“We actually decided a year or two ago to name this leg of the World Series the ‘No Excuses Tour’,” said Gans.

“Coach Neil Powell said to us we can complain about the time zone disturbance and the long hours on the road, or we can embrace the challenge and get the job done. The first time we followed that approach, the team won in Wellington and last year we did very well in Hamilton as well.

“So the same approach applies this time around. Yes, it is the biggest turnaround for us when it comes to time zones during the series, but we will not allow that to impact on us.”

The 21-year-old midfielder made a timely return to the Blitzbok team, having recovered from a hand injury that ruled him out of the opening two tournaments in Dubai and Cape Town, where the South Africans placed sixth and third respectively.

“It is great to be back as it’s always such an honour to play for this team and to represent our country,” said Gans.

“I worked hard to get back to full fitness again, so it is pleasing to be back on the field playing.”

Gans showed good improvement during recent outings for the team, growing in his role in the midfield amongst a host of world stars around him.

“This trip is all about contributing to the team,” said Gans.

“It is not about me at all. As happy as I am to be back and playing, the focus for me will be on doing what the team needs of me. We all have a role and I am very determined to do mine as best I can.”

The Blitzboks had a training session on Tuesday and visited the children’s ward of Waikato Hospital, in the afternoon.