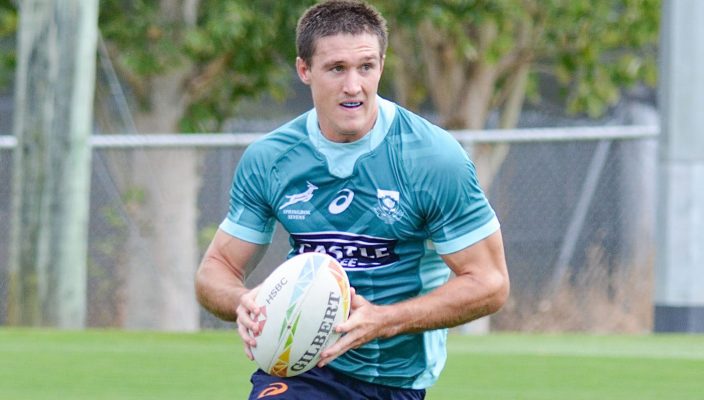 No mountain too high for Impi Visser

Scaling proverbial mountains is nothing new for the Springbok Sevens team. Who will forget how they fought back from 19-0 down to beat Fiji 20-19 in a thrilling final at last year’s HSBC Singapore Sevens?

Similar scenarios played out last month when the Blitzboks had to fight back in several of their matches in the opening tournament of the current HSBC World Rugby Sevens Series in Dubai before they could lift the trophy.

Come the HSBC New Zealand Sevens at FMG Stadium Waikato on Saturday and Sunday, the summit to success will again be a steep one, but for Blitzboks forward Impi Visser, it will be a familiar one.

The 24-year-old probably knows more about the hills and slopes of life in the physical and mental sense than most of the foes he will face this weekend, and Visser is determined to use that inner strength to his own and the Blitzboks’ advantage.

After relocating to Stellenbosch from Pretoria and completing his degree in engineering down in the Boland town, Visser also broke into the Blitzboks starting line-up and did so well that he played in all 10 tournaments of the 2018/19 World Series, scoring 13 tries in 55 matches.

On a personal level, earning his degree and then dropping another one into the bucket list by scaling Kilimanjaro topped a year full of highlights as he ended 2019 feeling on top of the world.

However, Visser missed out when the team was named for the 2019/20 World Series opener in Dubai last month, and travelled to the desert city as a member of the SA Rugby Sevens Academy.

The Academy side, which also featured the likes of Branco du Preez, Cecil Afrika, Werner Kok and Angelo Davids – all of whom are also part of the Hamilton squad – won the International Invitational tournament and eased the worries for Visser.

“We all know that 2020 will be a tough year in that regard as coach Neil Powell wanted to give the wider group an opportunity to stake a claim for the final squad that will go to the Olympics,” said Visser.

“Not to be part of the first squad for Dubai was disappointing, but only mentally. Physically, I was still on the field with like likes of Branco, Cecil, Werner and Angelo, which demanded that you give your best.

“You do feel bad when you are not in the team, but there is a bigger picture and it is not the end of the world.

“Emotionally one gets down a bit and there are some thoughts going through your head. You question your abilities, but for me that only lasted for a short while. It is all about how you use the opportunity that you are given, and I am keen to grab mine this weekend,” added the Pongola native.

Visser was the official reserve for the HSBC Cape Town Sevens and got a call-up on the final day when Kurt-Lee Arendse picked up an injury. He played in the final, where New Zealand edged the Blitzboks 7-5. His bounce back was completed when he was named into the squad to travel to New Zealand.

Back on the summit again, Visser can look down with a clear perspective on his role and responsibilities in Hamilton.

“In this squad, it is never about yourself – you need to put the team first and contribute, and that will be my goal, just to make sure my personal performance is one I am proud of and is beneficial to the team effort,” he said.

Visser slotted in seamlessly when he was recalled. The squad was announced when the players returned from their December break and they started preparing as such.

The early confirmation of the squad helped to overcome the effects of travelling for 30 hours to get to Hamilton, according to Blitzbok assistant coach Renfred Dazel.

“We had two weeks of solid preparation in Stellenbosch before we left,” said Dazel.

“We had to integrate Impi and the other guys who played for the Academy side in Dubai back into the team and it went well, so the squad arrived here well prepared. That allowed our guys to recover from the trip at our own time.”

“Our physio, Hugh Everson, and conditioning coach, Ghafoer Luckan, did well this week to get the guys moving again. We had a solid session today and the guys could respond accordingly, thanks to the good work they did.”