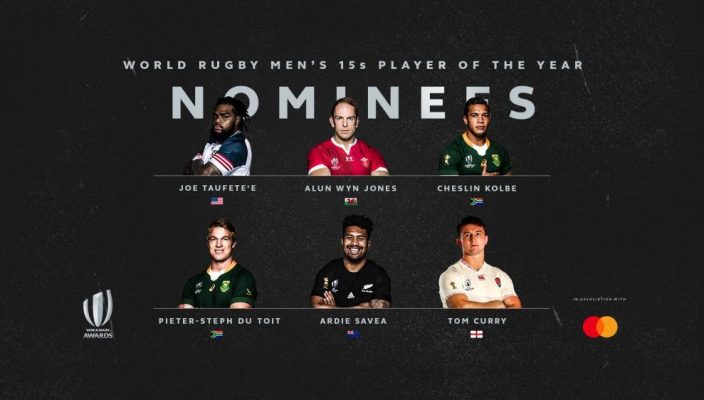 Nominees for World Rugby Players of the Year announced

World Rugby has announced the shortlists for the prestigious Men’s and Women’s 15s Player of the Year awards for 2019, which will be presented at the World Rugby Awards at The Prince Park Tower in Tokyo, Japan, on 3 November.

Following a stellar year for international rugby culminating in a very special Rugby World Cup 2019, the shortlists for the ultimate accolade feature players who have excited and inspired fans around the world with their feats during the year.

The shortlists were selected by the star-studded World Rugby Awards panels.

International players have also had the opportunity to vote to determine the nominees of the prestigious awards.

World Rugby Chairman Sir Bill Beaumont said: “The World Rugby Men’s and Women’s 15s Player of the Year awards are the ultimate accolade for test players and this year there have been an exceptional number of outstanding candidates. I would like to congratulate all 11 players who, deservingly, have been nominated for this year’s award.”

PIETER-STEPH DU TOIT (SOUTH AFRICA)
A linchpin in the South African pack, Du Toit has started eight of the Springboks’ 10 tests in 2019 and been an unused replacement in the RWC 2019 win over Canada. The towering 27-year-old may have flitted between second-row and flanker in the early days of his international career, but he has made the No.7 jersey his own over the last two years and his work-rate and versatility mean he is one of the first names down on Rassie Erasmus’ team sheet.

TOM CURRY (ENGLAND)
The youngest of the nominees at only 21, Curry has been at his destructive best during RWC 2019, tormenting teams at the breakdown and winning turnover ball with regularity as one half of England’s dynamic flanker pairing with Sam Underhill. A strong ball carrier who was named Player of the Match in the quarter-final against Australia, he has started 13 of England’s 14 tests in 2019, beginning the year at openside before switching to blindside in an inspired move by Eddie Jones.

ALUN WYN JONES (WALES)
He may easily be the oldest of the nominees at 34, but Jones is playing some of the best rugby of his career in 2019 – a year in which he has become his country’s most-capped player and moved to joint second in the history of the game. The towering second-row is a master in the lineout and carries the ball endlessly during a game, his energy levels seeming to have no limit as he pushes Wales forward. Captaincy clearly agrees with Jones, who has already led Wales to the Six Nations Grand Slam this year.

CHESLIN KOLBE (SOUTH AFRICA)
The dancing feet of Kolbe have lit up Rugby World Cup 2019 with the diminutive winger showing that size isn’t everything, his footwork and pace allowing him to turn a defence inside out and leave players clutching at thin air in his wake. The Springbok, who turned 26 earlier this week, has started six tests in 2019 and scored five tries, including two in the pool stage against Italy when he was named Player of the Match. An ankle injury ruled him out of the semi-final with Wales but the Springboks will be delighted he is back for the final.

ARDIE SAVEA (NEW ZEALAND)
With the ability to play anywhere across the back-row, Savea has been at his rampaging best in 2019, starting eight of the 10 tests played by New Zealand and coming off the bench against Canada in the RWC 2019 pool stage. His work-rate is such that you would be forgiven for thinking there was more than one Savea on the pitch at times, turning over ball at the breakdown, charging at the defence or popping up in a flowing attack.

JOE TAUFETE’E (USA)
The Eagles hooker has enjoyed a record-breaking year in international rugby, his hat-trick against Uruguay in March making him the most prolific try-scorer in front-row history – 18 tries in just 21 tests smashing Keith Wood’s record that had stood for nearly 14 years in a third of the caps. Taufete’e ended the Americas Rugby Championship as the top try scorer with six and was a key member of the Eagles’ squad for RWC 2019, starting all four matches in Japan.

SARAH BERN (ENGLAND)
The epitome of modern props, the 22-year-old is certainly not defined by the number on her back, possessing a turn of pace, quick feet and power – a hangover perhaps from her days as a back-row before converting to tight-head. Bern has started eight of England’s nine matches in 2019, including every match in a Women’s Six Nations Grand Slam winning campaign in which she scored five tries, second only to Red Roses winger Jess Breach.

PAULINE BOURDON (FRANCE)
Nominated for the second year running, Bourdon is a player in the modern mould of French half-backs who are equally happy at nine or 10 as she showed during Les Bleues’ Women’s Six Nations campaign, scoring three tries from scrum-half – including a brace against England – before moving to fly-half for the final two matches. Blessed with quick feet and an impressive step, Bourdon has started eight of France’s nine matches in 2019, including the Super Series win over New Zealand.

KENDRA COCKSEDGE (NEW ZEALAND)
An inspirational figure on and off the pitch with her infectious passion for the game and drive for success, Cocksedge has already received this accolade once, back in 2015. The scrum-half started all six of New Zealand’s matches this year, winning five of them – the only exception the loss to France in the Women’s Rugby Super Series when she captained her country on the occasion of becoming the second Black Ferns player to reach 50 tests.

KATY DALEY-MCLEAN (ENGLAND)
The oldest of the nominees at 33 and a test centurion, Daley-Mclean is both a talisman and playmaker for the Red Roses. She was the top point scorer in the Women’s Six Nations in 2019 with 53 points as England won a second Grand Slam in three years. The fly-half passed 500 test points during the Championship – a figure bettered only by Jonny Wilkinson and Owen Farrell for England – but missed the Women’s Rugby Super Series in San Diego due to injury.

EMILY SCARRATT (ENGLAND)
The centre slipped back into 15s rugby in 2019 as if she had never been away playing sevens since Rugby World Cup 2017, starting four matches in a Women’s Six Nations Grand Slam winning campaign, and scoring a try against Scotland. The 29-year-old always seems to have more time on the ball, gliding through gaps or releasing team-mates into space. She was at her most dangerous in the Women’s Rugby Super Series, scoring four tries in her three starts and 43 points in total.