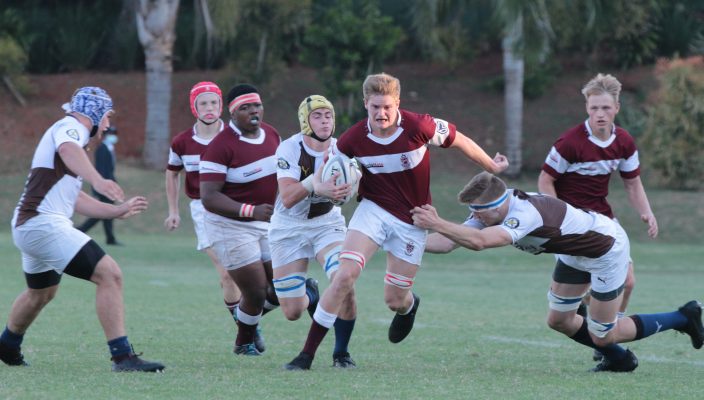 Northwood hosted Kearsney for their annual Classic Clash in Durban North on a steaming hot afternoon with temperatures well above 30 degrees.

The match got off to a flying start when Northwood’s star flyhalf received a poor midfield kick from Kearsney in an attempt to exit their half from the kickoff. Bahji collected the ball close to the halfway line and ran untouched to score in the right-hand corner which he converted for a 7-0 lead after one minute of play.

Two minutes later the hosts also failed to exit and Kearsney turned the breakdown with Tom Carmody prominent and winger Trent Coetzee scored an unconverted try, shrinking the deficit to 5-7.

The next seven minutes caused some drama with Kearsney losing firstly scrumhalf Matthew Bergset from a late charge, and soon after the inside centre with a suspected concussion. Kearsney then took the lead following a penalty by Lethu Gwarube. Conditions might have contributed, but both teams were guilty of sloppy skills and below par defense.

Northwood scored their second try from another poor decision by the Kearsney backs on the counter, to regain the lead 12-8. In the 25th minute the hosts stretched their lead further to 15-8 with a converted penalty.

Kearsney attacked well during the last five minutes of the half and were rewarded with a Coetzee try which Gwarube converted, to take the score to 15-all at half-time.

Shortly after the break, Kearsney added another Gwarube penalty for a 18-15 lead. The visitors played the most constructive rugby in the next 15 minutes, but failed to convert the territory into points, even turning down kickable penalties.

Northwood adopted a kick and chase tactic which led to their next converted try to regain a 22-18 lead. The visitors’ fullback in particular was poor in fielding the Northwood kicks, and Kearsney were under pressure at regular intervals.

Kearsney had a golden opportunity for an all-important seven pointer but poor handling prevented a sure try. Kearsney’s morale took a dip, which Northwood capitalised on, to score a converted try which was also the final score of 29-18.