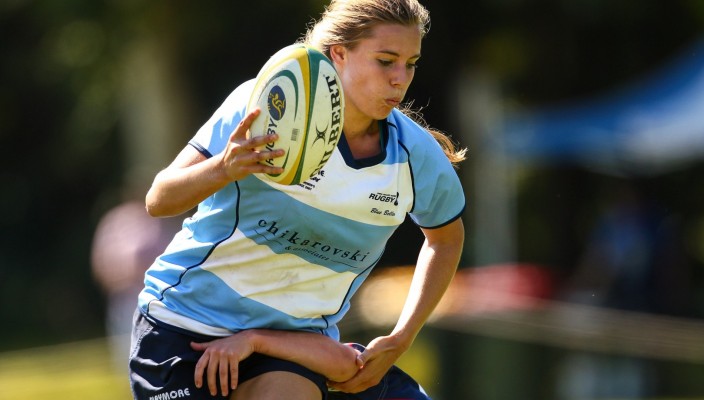 The next generation of NSW women’s sevens stars will head to Canberra this weekend for the National Women’s Sevens Championships.

The state will be strongly represented with two teams among the 12 teams from across Australia contesting the two-day event at the world-class Australian Institute of Sport facility.

The two NSW sides will be joined by teams from Queensland (two sides), ACT, Western Australia, Northern Territory, South Australia, an Australian Services team, a National Indigenous team as well as a Barbarians outfit, split into three pools of four teams each.

The journey for the successful NSW players begun in October 2013.  Since then, coaches Peter Hammond (NSW Blue) and Nathan McMahon (NSW White) have put in place a stringent selection process to discover and develop talent from across NSW.

The selection process was finalised following last month’s Sevens by the Mountain tournament, hosted by Penrith and

After a strong finish in last year’s event, that saw them contest the Plate Final, NSW Blue will tackle teams from Northern Territory, South Australia and Queensland White in their bid to reach this year’s Cup Final. The side contains three members of the Australian Sevens women’s squad that took out the recent IRB tournament in Barueri, São Paulo in Brazil, namely Cobie Jane Morgan, Emma Tonegato and Hanna Sio, plus fellow Australian sevens players Nicole Beck and Maddi Elliott.  The side also contains a wealth of experience, with long-time Australian Sevens representative Shontelle Stowers featuring along with former Australian Wallaroos star Ruan Sims.

The squad also features Mahalia Murphy who is attending her third National Championships. A current member of the Australian Squad for the Rugby World Cup, Murphy g left a promising athletics career to pursue her goal of playing rugby for Australia. Also included is National Squad Development player Emily Chancellor, who competed in the 2013 Championships playing for the ARU Barbarian side.

The NSW White team is full of developing talent and faces some tough opposition on their quest for a finals place and ultimately to claim the crown from last year’s winner, ACT. With a pool containing Western Australia, Queensland Red and the Armed Services, the White team will be backing its stars of the future to help reach its goal of a finals spot.

Among those to have been unearthed are potential stars of the future Chloe Dalton and Sarah Halvorsen, who will represent NSW White.

A former representative basketballer, Dalton was identified through the NSW Women’s Talent ID process, whilst Dalton will was a member of the successful NSW Schoolgirls Sevens team that won the 2013 National Schoolgirls Championships and was subsequently selected in the National Youth Olympic training squad.

Several more NSW stars of the future will also be in action at the Nationals, representing the ARU Barbarians.  A side selected by the Australian Rugby Union from players around Australia to have shown potential in domestic sevens series,  one to watch could be Anna Ruut, a national women’s league ice hockey player, who has impressed with speed and strength.

Rugby sevens, in particular women’s sevens, has seen exponential growth in NSW following the inclusion of the men’s and women’s events in the 2016 Rio Olympics.  This Women’s National competition is one of a number of tournaments, at schoolgirl and senior level, that seek to provide opportunity for women of all levels to experience the sevens game.

To see the draw and track all the progress of the NSW teams throughout the two-day competition, visit the ARU competitions homepage and select ARU then National Women’s Sevens.

The NSW squads that will travel to Canberra are:
NSW White