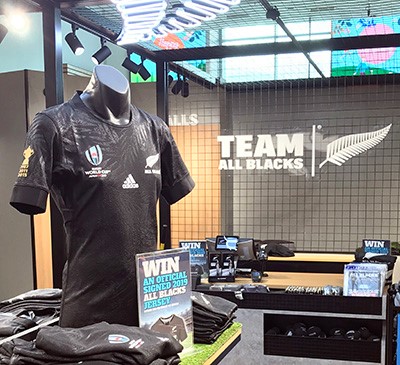 Operated in partnership with Lagardère Travel Retail, the addition of the Christchurch store comes 18 months after NZR’s successful entry into the retail sector, following the opening of its first permanent retail outlet at Auckland Airport.

NZR Chief Commercial Officer, Richard Thomas, said expanding the retail concept to a second location reflected the popularity of the All Blacks brand.

“We ventured into the retail sector in 2018 with the launch of the first Official All Blacks Store in a move to diversify our income streams – and it has been well received. We’re excited to launch a second store in Christchurch.

“The store will provide customers with an immersive retail experience which celebrates the unique passion behind the All Blacks, and will be a retail destination for the tens of thousands of domestic and international travellers who pass through the terminal every day, as well as Christchurch locals.”

Prominently located in the heart of Christchurch Airport, the eye-catching 120sqm store will be a one-stop shop for licensed All Blacks merchandise, offering customers a range of adidas All Blacks, Investec Super Rugby and Black Ferns apparel, as well as an unrivalled variety of All Blacks licensed merchandise.

Among the first products to be sold at the new store have been a Rugby World Cup Supporter Jersey, and a Haka Teddy Bear.

Przemyslaw Lesniak, Chief Executive of Lagardère Travel Retail in the Pacific Region, said he was thrilled to continue the partnership with NZR with the launch of a second Official All Blacks Store.

“We are proud to work together with our leading partners to bring such an iconic offering as the All Blacks store to the retail space in the terminal, creating a true sense of place and an unforgettable experience – one we are all very proud of.”

“The new store is an exciting and aspirational addition to the terminal. It opens as the Rugby World Cup begins and becomes the centre of a lot of conversation across the city and country.

“The store offers new experiences, new merchandise and new ways to support the All Blacks. We often see the players and their fans travel through Christchurch Airport, and are sure they will be drawn to the spectacular new store.”

Official All Blacks merchandise has previously only been sold through adidas owned channels, external retail outlets and via the online allblackshop.com.