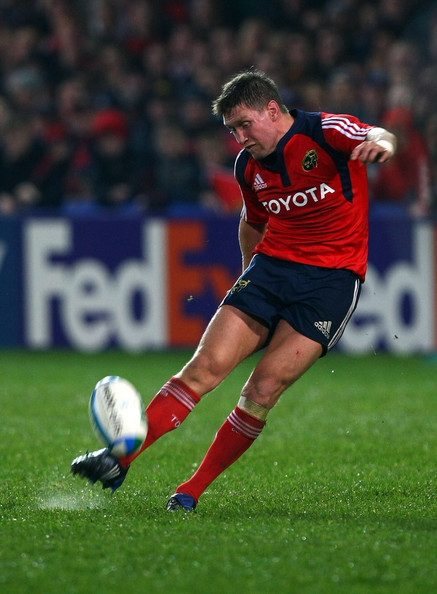 Ronan O’Gara simply can’t stop grabbing the headlines in the Heineken Cup. In the opening two rounds his last gasp drop goals helped Munster Rugby across the line in the Pool 1 clashes with Northampton Saints and Castres Olympique and this week his name will once again be on everyone’s lips as he looks set to make his 100th appearance in the tournament.

If he does reach the milestone at Parc y Scarlets on Saturday, it won’t be a first for the Irish points machine as team-mate John Hayes played his 100th game in Round 1. But the man who won the ERC European Player Award (1995-2010), and the first man to pass 1,000 tournament points, isn’t worried about that.

“I was honoured to present John Hayes with his cap for reaching 100 Heineken Cup matches. He was the most fitting Munster man to achieve that milestone,” said O’Gara.

“It is a great thing to achieve, but I don’t look upon it as anything big at this stage. When I retire in a few years time I will look back on it as being a significant cap because it is such a fantastic competition.

“It is a competition that has given me every possible emotion – and that’s why you play the game. I have had wonderful moments and disappointing moments, but that’s why you get involved in sport and that’s why this team is so special to me and why the fans are so loyal to the Heineken Cup – it is a wonderful ambassador for northern hemisphere rugby.”

How do you pick out one moment from a European career that started with a 48-40 defeat at The Stoop against Harlequins back in the 1997/98 season and has seen O’Gara win two titles, reach four finals and five other semi-finals. It is virtually impossible, especially as this season’s two games have thrown up two more candidates for his Top 10 best moments.

“Because of the way the competition is structured, if you are lucky enough to win it you play nine games, which isn’t many. That means every game in Europe is a big one,” he added.

“That has been the way Munster has always looked upon it. Last year when we didn’t get out of our group we were guilty of treating every game the same. But the stature of the Heineken Cup is that it has been held above everything else. That’s the way it has always been for us in Munster and that’s how I want it to be.

“I’ve been so lucky because the Heineken Cup has given me so many great memories. To name just a few would be doing an injustice to the 25 or more others I could choose.

“You can go back to the semi-final against Toulouse in 2000 and see the brand of rugby we played. Munster had traditionally been a forward orientated side, but that was the start of the 15 man game.

“We have evolved every season since then, which you have to do, because the standard rises every year – it is an unbelievable competition.”

Now in his 15th season in the tournament, the 34-year-old O’Gara has seen the Heineken Cup develop from its infancy. There were a mere 2,000 at Musgrave Park in 1998 to see his home debut in the win over Petrarca, whereas these days Thomond Park is more often than not filled to its 26,000 capacity for European games.

“No one had a clue when it first started that it would grow into what it has become. The whole thing has snowballed,” said O’Gara.

“It was popular at certain stages throughout the season, but the support bases that Munster, Ulster, Leinster have built, and now Connacht, have been phenomenal. It is real a tribute to what these provinces have done.

“When we played Leinster in Dooradoyle in 1997 there were 500 people there. Now we can get 80,000 for a Heineken Cup clash between the same two teams. That shows the impact the game has in this country and it doesn’t happen by chance – there has been a lot of hard work done by the provinces, ERC and Heineken.

“The fascinating thing about the Heineken Cup is it is a club competition. People miss that point sometimes. You have some of the best players in your country on the team and then some younger players who are trying to develop who wouldn’t get on an international side.

“What is so good about the Heineken Cup is the game that can be played – you have more time on the ball. You have a second longer than you would have in international rugby.

“That’s the key difference. There are opportunities for mis-matches whereas at international level that doesn’t happen, which is why it is a slightly less appealing game to the fans.”