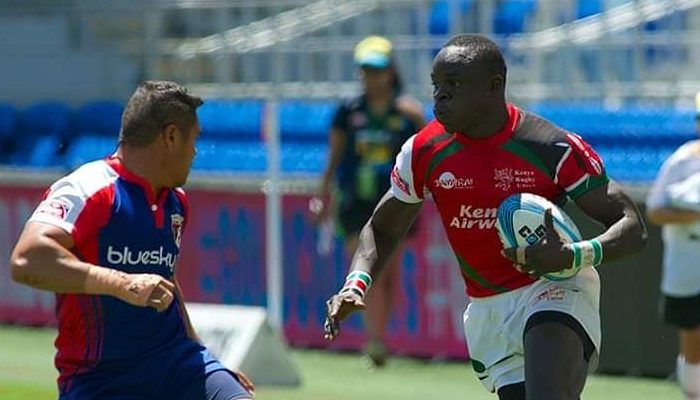 Jacob Ojee will skipper the Shujaa squad during the Hamilton and Sydney 7s deputized by Michael Wanjala. Commenting on his selection of Ojee as Captain, Head Coach Paul Murunga had this to say, “Ojee is able to lead the team. This has been noted enough times during our training sessions where he ensures all players communicate, his experience in the wing in the 15s version of the game as well as in the 7s is also very key. Wanjala’s past experience in the international sevens stage is also very crucial as we head out to New Zealand.”
“It’s an honour to Captain Shujaa. It is a huge responsibility but with the current squad, I am confident that we are going to improve on our performance.” – Jacob Ojee
Former Kenya Under 19 Captain, Harold Anduvate is also part of the team on National Duty. He is one of five new call ups into the squad: Brian Wandera, Eliakim Kichoi both who were in the Safari7s squad while Eliakim was also part of the team that traveled to Tunisia for the Africa Men’s 7s. William Reeve has also received a nod from the Head Coach. They are joined by Cyprian Kuto, Johnstone Olindi, Brian Wahinya, Vincent Onyala and Daniel Taabu all who were in the Dubai and CapeTown 7s legs of the HSBC World Sevens Series. Bush Mwale makes a comeback into the squad after one season hiatus. He was last in the set up during the 2016/2017 season under former Coach Innocent Simiyu.
Murunga is confident that based on the training sessions the team has had, they will improve on their performance as the HSBC Caravan heads to New Zealand.
Charles Omondi and Alvin Otieno miss out on the tournament due to injuries. Mark Wandetto travels as player thirteen.

The team is currently ranked 14th on the HSBC Standings log with four points. They will kick off their campaign on 26th January at 0022Hrs against South Africa, three hours later they’ll meet Scotland for the second time this season at 0348Hrs before ending their day one at 0800Hrs against France.