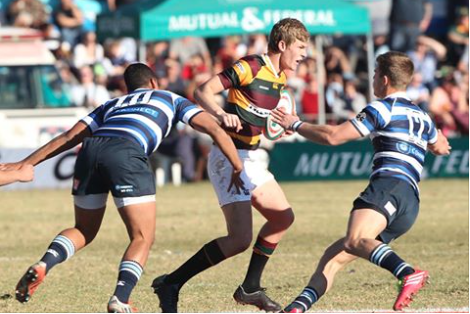 After waiting 4 years for a victory, Paarl Boys High came out on top in a tough Interschools battle with rivals Paarl Gimnasium. In the 100th match between these two powerhouse schools, it was the Southern Team team in blue who prevailed and made less mistakes to take this encounter 16-10.
The match kicked off at a furious pace with PBHS dominating possession for the first minute or two. When Gim eventually got their hands on the ball, flyhalf Wian van Zyl tried a chip kick over the Paarl Boys defence only for tall centre Jan-Louis le Grange to charge it down. 8th man Khanya Ncusane chased the ball in open space and with great skill booted it ahead. The bounce favoured Ncusane who gratefully accepted it and bashed over the line for PBHS to score their first try in only the 3rd minute of the game. Fullback Jean-Luc Cilliers converted and suddenly PBHS was leading 7-0.
Three minutes later Gim was penalised in the tackle situation and again Cilliers was succesfull and PBHS had a 10-0 lead. Things settled more after that and it became the usual hard and uncompromising game that is typical of an Interschools. When PBHS was penalized at the ruck, Fullback Theo Boshoff converted it to give Gim their first points to make the score 10-3 to PBHS after 10 minutes.
Paarl Boys suffered a setback when hard working flanker JC van Schalkwyk was stretchered off after injury. He was replaced by 2nd XV player Ruan van der Merwe, who ended up playing a very good match. PBHS launched a few attacks and the most promising was just stopped short by a great tackle from Wian van Zyl on tall lock Ruben de Villiers as he was haring down towards the touchline. Gim capitalized on PBHS unusual struggle in the line-outs and from an overthrow, they swept into the Paarl Boys 22 meter area and launched attack after attack. They were awarded three penalties and only opted to take the last one after they could not breach the Paarl Boys defence. This was unfortunately missed by Boshoff and they had nothing to show for 5 minutes of relentless attack. They again had a shot at goal from further out, but this was also missed and when halftime came, the score still stood at 10-3 in favour of Paarl Boys.
Just after halftime, the two teams seemed to reach a stalemate with both teams relentless in defence and not gaining any ground on attack. Then Paarl Boys decided to drift wide and scrumhalf Bradley Thaine got his timing wrong and passed a flat ball into the hands of Gim centre George Lourens who beat one defender and offloaded to Boshoff who speeded down the line and beat another defender to score. Boshoff converted his own try and the scores were level at 10 all after 47 minutes.
Cilliers then converted a 40m penalty after Gim was penalised at rucktime and Paarl Boys were back in the lead with 13-10 after 55 minutes. Cilliers got a cramp just as he kicked the ball and had to be replaced by Jandrè Grobbelaar. Paarl Boys then had an opportunity to put Gim under pressure in their own 22, but were penalized at the ruck. This brought relief for Gim, but only for a short while as they were penalized in turn at the next ruck. Grobbelaar gratefully accepted the chance and put Paarl Boys 16-10 ahead with 3 minutes to play.
Paarl Boys opted to keep ball in hand and tried to pick and drive, but was penalized for sealing off the ball. Gim opted for the line-out with seconds to go on the clock. They then first tried to form a maul but were countered by the boys in blue. Then they opted to bash up midfield but was stopped their as well. Another penalty ensued and they opted to run it wide only to be penalized when centre Taigh Schoor played the ball in the tackle again. This signalled the end of the match as thousands of old boys streamed onto the field to congratulate their players.
This game was won by the better options taken by Paarl Boys in their kicking game and their resolute defence.
Scorers:
For Paarl Boys’ High:
Tries: Khanya Ncusane
Conv: Jean-Luc Cilliers 1
Pens: Jean-Luc Cilliers 2, Jandrè Grobbelaar 1
For Paarl Gim:
Try: Theo Boshoff
Conv: Theo Boshoff
Pen: Theo Boshoff
Teams:
Paarl Gim: 15 Theo Boshoff, 14 Max Thalwitzer, 13 Charl du Toit, 12 George Lourens, 11 Keenan Abrahams, 10 Wian van Zyl, 9 Anrich Stoman, 8 Muller Uys, 7 Gustav Marais, 6 Johan Adam van As, 5 Ernst van Rhyn (captain), 4 MJ Hayes, 3 O’Neil Thiart, 2 Johan Grobbelaar, 1 Rohan Hamman
Replacements: 16 Emile Booysen, 17 André Booysen, 18 Jan Neveling, 19 Nicolaas Uys, 20 Janus Swart, 21 Andries Viljoen, 22 Naudé Wessels, 23 Taigh Schoor
Paarl Boys’ High: 15 Jean-Luc Cilliers, 14 Tyreeq February, 13 Manuel Rass, 12 Jan-Louis la Grange, 11 Urgene Johannes, 10 Rayhaan Lombaard, 9 Bradley Thain, 8 Khanya Ncusane, 7 JC van Schalkwyk, 6 Andreas van Wyk (captain), 5 Salmaan Moerat, 4 Ruben de Villiers, 3 Leo Kruger, 2 MC de Jongh, 1 Wikus Groenewald
Replacements: 16 Daniel Jooste, 17 Reece Bezuidenhout, 18 Ruan van der Merwe, 19 David Meihuizen, 20 Kristo Sadie, 21 Jandré Grobler, 22 Jacques Burger, 23 Adam Neethling
Referee: Francois Pretorius (Western Province Referees’ Society)