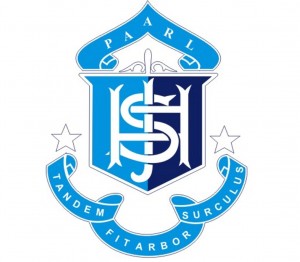 Hoër Jongenskool Paarl (also known as Boishaai, Paarl Boys’, BHS or HJS) is one of the oldest schools in South Africa. Built in 1868 the school’s rich history is filled with tradition and pride. The first building to house the school was a granary on Zeederbergplein, the owner of which was Mr. D. Beyers (a close friend to the first headmaster, Rev. Jeffreys). The first years of the school were unstable ones, with the school increasing in size every year, larger facilities were required frequently. The grounds on which the school stands today were originally formed part of the farm Berlyn owned by Mr. P.J Malherbe.
Paarl Boys’ High has featured in the academic merit list of the Western Cape for ten years running and has been featuring in the top ten for the duration as well, making it one of the top academic schools in the province. The school is bilingual, with classes in English and Afrikaans and has maintained a 100% pass rate for over a decade.

Boishaai can be seen primarily, as a boarding institution. The erection of the first hostel, Monte Bello, in 1901 can be seen as the one of the greatest turning points in the history of the school. This event inaugurated the change from a small school in a small farming community to a school to be esteemed nationally. In 2012 the four hostels, Bellevue, Imhoff, Monte Bello and Werda, house over 400 learners from all parts of South Africa and from abroad.

Good conduct, good scholarship and good sportsmanship reflect the school’s proud tradition which spans over 143 years. Throughout Southern Africa, Paarl Boys’ High has always been regarded as a school with an unblemished record when it comes to producing men as well as leaders who have excelled in all walks of life. As a centre of excellence it is the school’s mission to create an environment in which every boy can reach his full potential in the academic, cultural and sporting field.

Rugby is an integral part of the Paarl Boys’ way of life. It helps in educating the boys and growing the gentlemen Paarl Boys’ High is known to raise. It is important to win, but that should not be the primary objective. A sportsman may never be abused to ensure the success of a team. The primary objective at Boys’ High must be one of enjoyment, for both player and coach. Whereas we agree with the legendary Vince Lombardi when he said: ‘’Winning isn’t everything; it’s the only thing’’ we hold winning to be more than just points on the board. Winning relates to the values, commitment and the pursuit of the best of one’s abilities.

Boishaai has produced 19 players that have represented South Africa since 1906. They have provided some of the legends and most famous Springbok rugby players ever to have played in the Green and Gold. Players like Oom “Boy” and Fanie Louw, Piet “Spiere” du Toit, Mannetjies Roux, Ryk van Schoor, Carel Du Plessis and Corné Krige.

The 1961 Springbok team against Australia featured 3 Boishaai old boys. Piet Du Toit and Mannetjie Roux as players and Oom Boy Louw as the coach! (Picture Below) 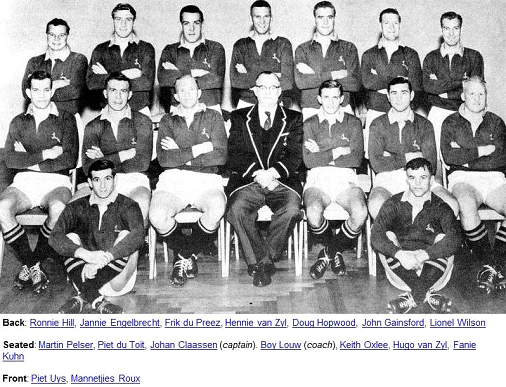 Legendary “Oom” Boy Louw and Carel du Plessis also coached the Springboks. Corné Krige is still the only SA Schools captain who went on to captain the Springboks as well. Ryk van Schoor’s son, Theuns is currently a teacher at Boishaai and coaches the u/16’s as well as the Western Province u/18 Cravenweek team. Carel du Plessis’ son (Jean-Luc) is playing flyhalf for the 2012 1st XV.