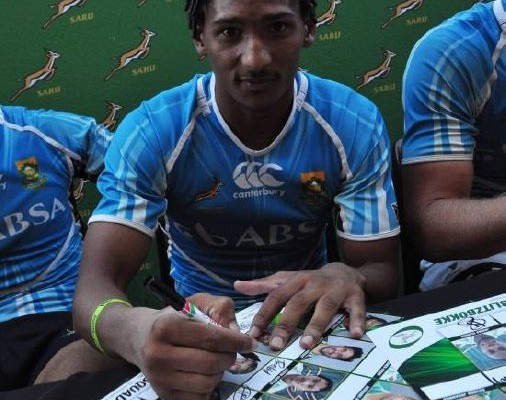 Patience is a virtue says Geduld

His form is not quite where he wants it to be, but for now Springbok Sevens playmaker and flyhalf, Justin Geduld, is pleased that his road to recovery was a smooth one and that he is back in action for the Blitzboks.

The 24-year-old injured his ankle in March last year in Las Vegas and also underwent foot surgery, only returning to the Blitzboks in November as the new HSBC World Rugby Sevens Series kicked off.

He played his part in South Africa’s victory in Dubai, was influential in Cape Town and left Sydney last weekend as the top points’ scorer in the tournament, but Geduld feels his best is yet to come.

“I was quite patient in my rehab and the start of my season, expecting it to be a gradual return to my best form,” said Geduld, who scored 56 points last weekend.

“In reality though, on the circuit, you need to be at your best all the time.

“I have made good strides yes, but I am always looking to improve and I don’t feel that I am at my very best yet.”

Geduld and the leading Blitzbok points’ scorer of all time, Cecil Afrika, are pushing each other for the starting spot, but Geduld insists that their competition is a healthy one.

“Cecil and myself are bringing out the best in each other,” said Geduld after the Blitzboks finished their final session before tournament kicks off in the FMH Stadium in Hamilton for the first time on Saturday.

“We have a specific role to play in the team and it is important for both of us to do that. We are really supporting of each other and even at training we are always encouraging and helping each other.”

The New Zealand tournament was moved to Hamilton this year from Wellington, where it was hosted it since the start of the World Series. The tournament has also been moved until after the Australian leg.

“In recent years we struggled to adapt with the time zones when playing in New Zealand,” said Geduld, who feels the Blitzboks will make a good fist of retaining the title they won last year.

“Last year, when we won, we had a ‘no excuse’ approach and that helped. This time also, having played in Australia already, the time difference is not really a factor.

“We had a great session and the guys looked sharp. Last weekend’s performance in that final is behind us and we are ready to take on Papua New Guinea on Saturday and then shift our focus to Russia and then England, our other opponents in pool B.”

The Springbok Sevens team for the HSBC NZ Sevens: