On 29 January 1864 the Rev. J.H. Neethling of the Stellenbosch Dutch Reformed Church writes to Dr. Langham Dale, Superintendent General of Education of the Cape:

“As a piece of news that will interest you, I may state that yesterday (28 January 1864) 30 inhabitants of this district have decided to erect a gymnasium or Latin School. They have guaranteed 465 pounds (R930) per annum, chosen a Board of Directors of five persons to carry out the resolutions with all possible speed and decided that as soon as possible a preparatory school or infant department shall be established.”

In 1879 the Gymnasium and College had separate functionally. The College acquired the name “Stellenbosch College”. In 1885 the separation also became physical when the school and College moved to new but separate premises between Andringa and Van Ryneveld Streets. The name Stellenbosch College changed to Victoria College in 1887 and this institution became the University of Stellenbosch in 1918.

In 1887, “The Young Men’s Home” or “Het Tehuis”, the first hostel for boys, opened its doors under the supervision of Mr J.D. Krige – later affectionately known as Oom Japie “Home”. The present school hall is named after him. He was vice-rector at the time of his retirement in 1948, and ever since, a painting of him takes the place of honour next to the stage.

The school was renamed three times, Stellenbosch Boys High and Victoria College after the Queen. In 1940, it was renamed after Paul Roos, a former captain of the Springbok rugby union team. Roos was a former pupil and teacher at Paul Roos Gymnasium, and was the school’s rector from 1910 to 1940. 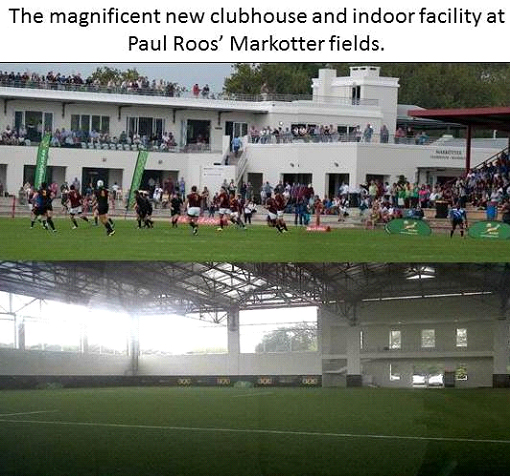 The words Paul Roos and rugby are synonymous as the great man was the originator of the now famous Springbok emblem and name for the South African national team. He is seen by many as the “father” of South African rugby and it is fitting that the school that carries his name is such a powerhouse in South African schools rugby. 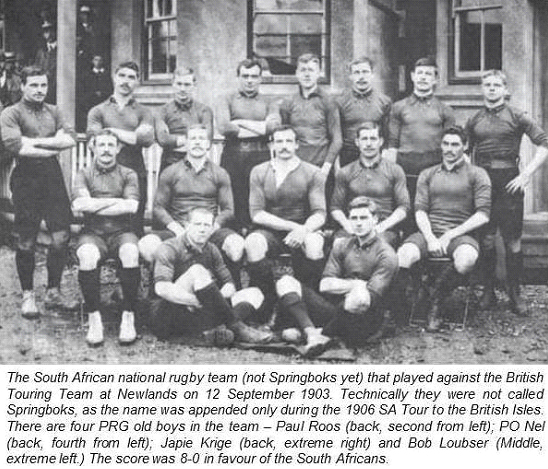 Paul Roos has to date produced the most South African players to represent their country on a rugby field with Juandre Kruger becoming their 50th player when he played against England at Kingspark on June 9th 2012.

With the current crop of excellent youngster coming through the ranks, one can be assured that Paul Roos will keep on producing rugby players that will go on to represent their country one day.

Paul Roos Old Boys that achieved honours for national teams are 4 Springboks, 3 Blitzbokke & 1 SA u20.
The Dream Teams is compiled of only Old Boys thats still actively playing rugby around the world.
Players that has the attention of Springbok coach is young Stormers prop Steven Kitchoff, Lions captain Josh Strauss & Cheetahs star winger Willie le Roux could be receiving their Springbok caps in the very near future.