The Mutual and Federal Interschool’s gets underway with a mouth-watering derby when old foes Grey High and Paul Roos meet on Saturday the 9th of April.

The visitors from Port Elizabeth will be hoping to replicate their last performance at the Markotter Field this time round. In 2014 Grey were 26 points down but ended up winning the match.

However, it’s the home team who still dominate, but only narrowly.

Paul Roos have won five of the nine encounters played in the last nine years.

You can also catch the build-up show Wednesday April 6 at 17:45 on SuperSport 8 featuring Stefan Dippenaar and Steven Hunt. Other build-up show times below located at the bottom of article.

The words Paul Roos and rugby are synonymous as the great man was the originator of the now famous Springbok emblem and name for the South African national team. He is seen by many as the “father” of South African rugby and it is fitting that the school that carries his name is such a powerhouse in South African schools rugby. 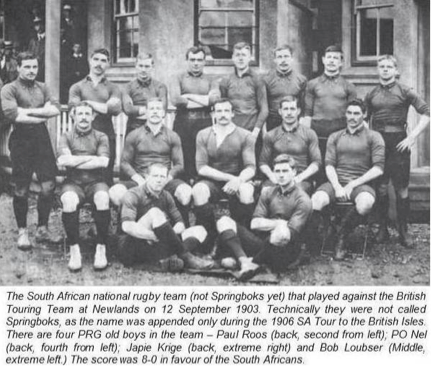 Paul Roos has to date produced the most South African players to represent their country on a rugby field with Juandre Kruger becoming their 50th player when he played against England at Kingspark on June 9th 2012. Their latest Springbok is fullback Willie Le Roux who got his test cap against Italy in June 2013.

The following players from Paul Roos represented South Africa on the rugby field.

Grey High has a proud history in South African rugby producing 15 Springboks that represented their country at international level. It is to be noted that two of these players matriculated elsewhere, Ian Kirkpatrick at Kimberley Boys High and current Springbok centre Jan Serfontein, spend his formative years in Grey Primary and Grey High up to Grade 9 before matriculating at Grey College Bloemfontein.

Grey has a proud rugby tradition and record which dates back to the 19th century. Traditional schools they compete against, on an annual basis, are Dale College, Graeme College, Grey College, Queen’s College, Selborne College, St. Andrew’s College, Wynberg High and of late Paul Roos Gymnasium.

The first rugby match was played on the 16 September 1893 against Muir College of Uitenhage. During the years 1919 to 1923 Grey played four internationals against Dale, Gill, Kingswood and St Andrew’s. Money for the main field was donated by an Old Grey, Arthur Phillip in 1938 and thus the main field is “The Phillip Field”.

Special mention must be made of Michael Catt, Rory Duncan and Luke Watson who captained the England, Free State and Western Province Currie Cup sides respectively in 2007.