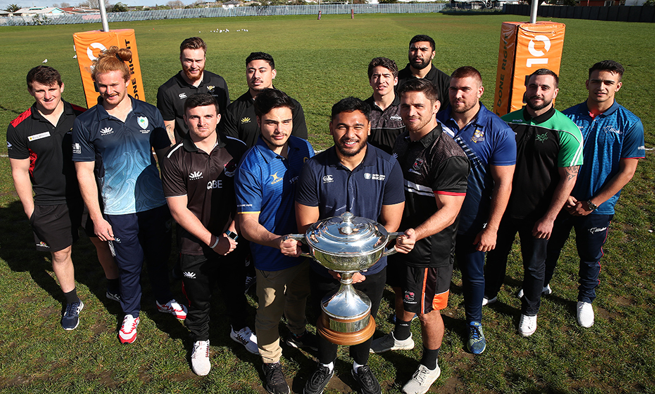 New Zealand’s Mitre 10 Cup teams are digging in deep to help kick off the competition’s 2019 season.

Players from 13 of the national provincial rugby teams in the competition converged on Mangere’s Koru School today for the official launch, nine days out from the first kick off.

Alongside the schools’ young rugby stars, players rolled up their sleeves to plant shrubs and plants at the school in a symbolic gesture of teams having strong community ties.

New Zealand Rugby Chief Rugby Officer Nigel Cass said the Mitre 10 Cup continues to be an important breeding ground for talent in New Zealand.
“Year on year the Mitre 10 Cup will elevate players to become household names. There are players that this time last year were preparing for Mitre 10 Cup that now have their sights set on the Rugby World Cup.

“You can’t underestimate the history behind these traditional rivalries, it’s an exciting tie of year for rugby fans right across the country,” said Cass.
Mitre 10’s General Manager Marketing Jules Lloyd-Jones said Mitre 10 is proud to back local rugby, and local communities, across the country.

“Today was a great way to launch the Mitre 10 Cup, connecting with local kids and sharing in some hard work in the garden that they’ll see grow over time; a really fantastic way to kick off the season.

“Across the country our Mitre 10 Mums, Dads, Uncles, Aunts, Brothers and Sisters will again be on the side lines cheering and supporting their local and regional teams.”

The Mitre 10 Cup kicks off next Thursday with Southland hosting their most northern rivals, Northland.

Enticing first up matches also see defending champions Auckland take on neighbours North Harbour, a battle of the Cook Strait with Tasman hosting Wellington and cross-country battle between Manawatu and Hawke’s Bay.
After 10 weeks of round robin, the top four teams in the Premiership and Championship will progress to the semifinals on 18 and 19 October, with the Finals the following weekend.

Otago has held on to the Ranfurly Shield over the summer and successfully defended it against Thames Valley and North Otago in preseason matches. Their first challenge in the Mitre 10 Cup will come from neighbour Southland in Week 2.

The Mitre 10 Heartland Championship kicks off on 24 August, with the Farah Palmer Cup in action from 31 August.