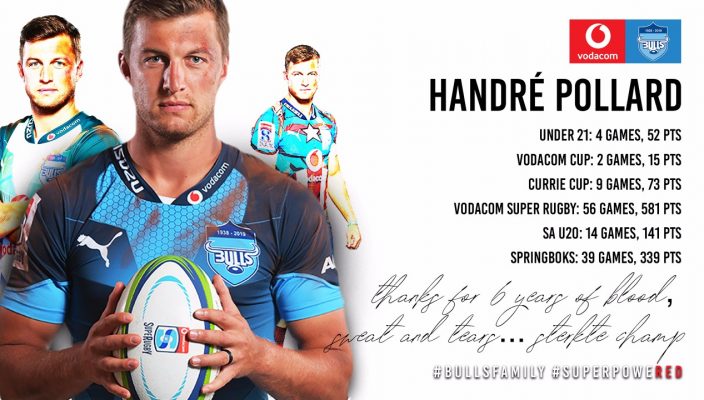 Pollard off to Montpellier

May 14 • General News, International, Other Tournaments, Top 14 • 3273 Views • No Comments on Pollard off to Montpellier

The Blue Bulls Company would like to confirm that Vodacom Bulls and Springbok flyhalf Handré Pollard has agreed terms with French club, Montpellier.

Pollard, currently preparing in Melbourne with the Vodacom Bulls squad to play the Rebels on Friday, indicated his intention to the BBC when a renewal of his contract came up for discussion.

The flyhalf, who has scored 581 points (nine tries, 110 penalties, 88 conversions and four drop goals) for the Vodacom Bulls joined the franchise in 2013, straight out of school.

He has played 56 times for the Vodacom Bulls thus far and became a Springbok in 2014. He also played 39 tests so far, amassing 339 points.

Blue Bulls Company CEO, Alfons Meyer said, “Handre has been a true servant for us for six years. He has been an outstanding asset, not only to the teams he played for, but also our supporters, to whom he endeared himself from early on with his attitude towards the Vodacom Bulls. He will be missed for sure, but we cannot fault his decision to continue his career in France. We wish him well.”