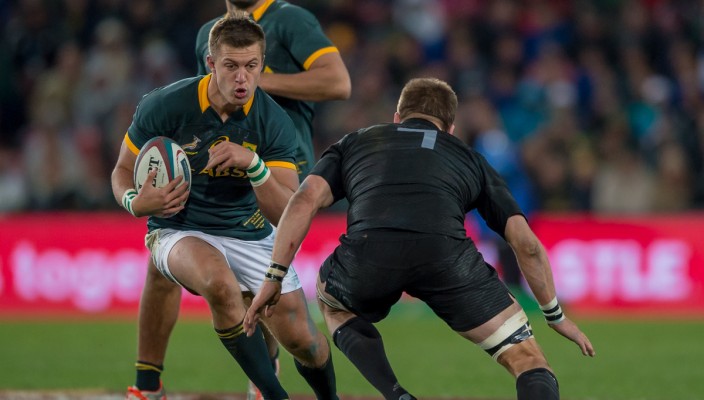 Pollard: Playing at a packed Loftus will be special

Handré Pollard is looking forward to playing for the Springboks against the All Blacks in front of a capacity crowd at Loftus Versfeld, the No 10 said on Tuesday.

Pollard and his provincial and national team mate Jesse Kriel spoke to the media at their Pretoria hotel on Tuesday afternoon, and both marvelled at the prospect of playing in front of a capacity crowd on Saturday, in the final round of this year’s Castle Lager Ruby Championship.

Both players were part of the victorious Springbok side that scored a famous away win over the All Blacks in Wellington three weeks ago. Siya Kolisi and his team mates managed to also beat the Wallabies last weekend in Port Elizabeth, giving the Springboks some good momentum going into the much-anticipated Loftus clash.

“There’s no doubt that they (All Blacks) will be coming hard at us,” said Pollard.

“They don’t like losing and they would want to rectify matters. We know it’s going to be hard and physical and we will have to match that.

“We have a bit of confidence and we are in a good space but we strive to consistently play at a high level. There’s no doubt that Saturday will be an enormous test for us.”

Tickets for the match have been sold out a few weeks in advance already, meaning that a special atmosphere will await the two teams on Saturday.

“We’ve often spoken about what it would be like to play a Test match for the Springboks in front of a packed, sold-out Loftus. Well on Saturday we will get that chance and we are all very excited,” said Pollard.