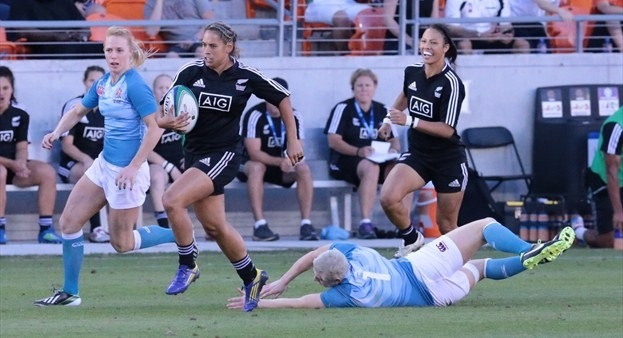 With a month to go to kick off, the pool draw for the second round of the IRB Women’s Sevens World Series in Atlanta, USA, has been announced.

The competition will take place at Kennesaw State University on February 15 and 16, and follows on from a very successful first round in Dubai in November.

In Dubai, Australia stunned inaugural Series winners New Zealand to claim a first title, after an enthralling final. This time around they have been drawn in Pool A with hosts USA, Canada and China.

Pool B has already been nicknamed the “Pool of Death” with New Zealand, England, Ireland and the Netherlands set to face off in Atlanta, in what should be a compelling set of matches.

As with all five rounds of the 2013/14 IRB Women’s Sevens World Series, the action will be streamed live on irb.com

IRB Head of Competitions and Performance Mark Egan said: “We’re really excited about the second round of the Women’s Sevens World Series in Atlanta.”

“The quality and competitiveness of the Series has already stepped up a notch from last season.”

“That was highlighted in the round one final in Dubai where Australia came back from the dead to beat New Zealand in what was a thrilling exhibition of Rugby Sevens at its very best.”

“I expect we’ll see more fantastic matches in Atlanta, in what should be both a great event and a great boost to the Women’s Game in the United States.”

USA Rugby CEO Nigel Melville said: “It’s a privilege for USA Rugby to be at the forefront of the development of international women’s Rugby. The Atlanta 7s will be an opportunity for us to showcase Sevens and help us to raise the profile of the Game in America.”

Australia, Canada, England, Ireland, New Zealand, Russia, Spain and USA are core teams on the 2013/14 IRB Women’s Sevens World Series after reaching the quarter-finals of Rugby World Cup Sevens 2013. The eight core teams will compete across all rounds of the Series.

The draw for the third round of the IRB Women’s Sevens World Series in Sao Paulo, Brazil on February 21 and 22 will be made following the completion of Round two matches in Atlanta.