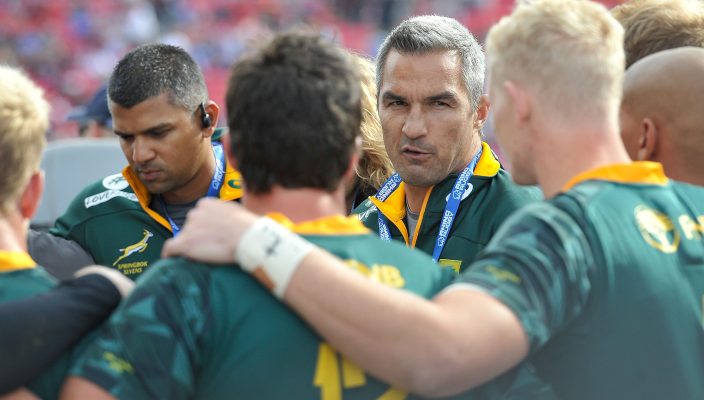 Springbok Sevens coach Neil Powell praised and thanked the Blitzboks squad after a very successful HSBC Canada Sevens tournament in Vancouver, where the South Africans claimed the title in commanding fashion after beating Kenya 38-5 in the final at BC Place early on Monday morning (SA time).

In claiming the title, the Blitzboks delivered a masterclass throughout the weekend, with a number of impressive performances in the pool stages on Saturday, , as well as Sunday’s knock-out matches.

“I am very happy and pleased with the performance the squad delivered,” said Powell.

“As a coach I could not have asked for more. The most pleasing part must be the way they played for the jersey and the way they worked for each other.

“One could sense in the preparation for the tournament already that there was a lot of commitment from the guys, and one could sense the hunger to just go out there and play. The Olympics aside, we have not played in the World Series for a year and a half, and the guys were really keen to get back at it.”

“The players deserve all the credit. They really worked hard and did everything that was expected of them. Everyone executed in their role and responsibilities,” said Powell, adding that the team’s execution on day two was spot on.

“We played Spain twice and Kenya twice and won comfortably the first time around. That often creates a false sense of security, but the team did not fall into that trap and came out with an even stronger performance against those teams the second time around.”

The Blitzboks were on fire in the final and Powell left the stadium a proud man: “The performance in the final was one the players can really be proud of. They took control from the start and never allowed Kenya to have a look in. It was a massive physical effort.”

Powell pointed to the impact of the wider group as well.

“I am also very pleased for the wider squad effort,” said Powell.

“There were massive contributions from everyone in the system – the medical staff back home, the technical staff and this again showed the great work done by our SA Rugby Sevens Academy.

“The four debutants really played well and enhanced the reputation of the Academy’s ability to prepare players for the World Series. We will have a short rest and then get our minds on our next job, in Edmonton next weekend.”