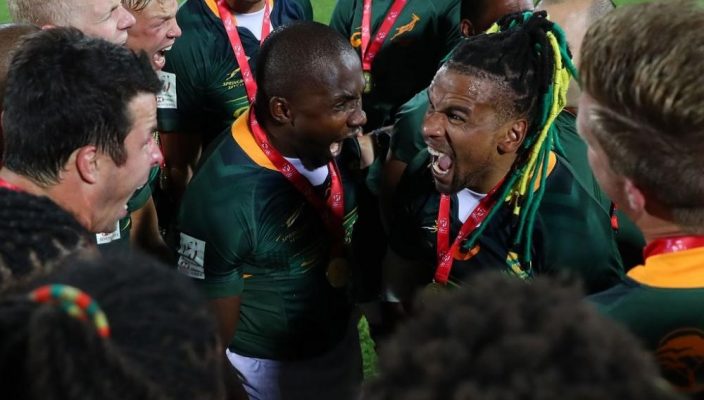 Powell on Dubai win: “Blitzboks coming together was key”

The way the Springboks Sevens team came together over the three days of the Emirates Airline Dubai Sevens contributed to their performances and resulted in them winning the tournament, the first of the new HSBC World Rugby Sevens Series.

The Blitzboks beat New Zealand by 15-0 in the final after eliminating Argentina and Samoa earlier on Saturday in the quarter-finals and semi-finals. A full match and scoring summary of the final day can be found here.

Blitzbok coach Neil Powell said the squad grew stronger and stronger as the tournament progressed, which helped them execute in several ways, but the coach was worried after their performance on the first day, when they scored a close win over Kenya. However, it became clear thereafter that they were finding each other.

“I was wondering after that Kenya game if the guys would be able to find each other during the tournament – as we progressed in the tournament they did and became a very tight team at the end,” said Powell.

Powell used the Dubai tournament to match some players who returned from fifteens with some of the junior players, who played last season.

“Some of the younger players did not play with the older guys before and they needed to find each other out there,” said Powell.

“Someone like Kurt-Lee (Arendse) has not played with Ruhan (Nel) or Rosko (Specman) before, so that was always going to be a challenge. They pulled together as a team over these six games and I am very proud of their effort.”

The progress of the team was measurable in the way they defended, he felt.

“They improved with every match,” said Powell.

“The step-up on defence was great and that was one area we are very pleased about. If you can keep teams out, you will be successful in tournaments.”

The first tournament of every new series is normally a bit of an unknown and Powell was impressed by a few performances from other teams, while also praising their opponents in the final, New Zealand.

“Samoa was not bad at all and Australia impressed me as well. England also played very well towards the end and New Zealand was strong,” said Powell.

“The final against New Zealand was incredible and they deserve a lot of credit. It was very tight. In the first half there were a couple of end-to-ends and they scrambled so well.

“We had turnovers and attacked, but their scramble defence was excellent and we just could not score. We stayed in control of the match though and that was the difference. From the kick-off we had control.”

Powell said they will travel back home to South Africa with some confidence for next weekend’s HSBC Cape Town Sevens, from 13-15 December.

“Coming to Dubai, it was not really about the outcome, but the process we needed to implement. We had a great effort out here and if we can repeat that, we can be successful in Cape Town again,” said Powell.