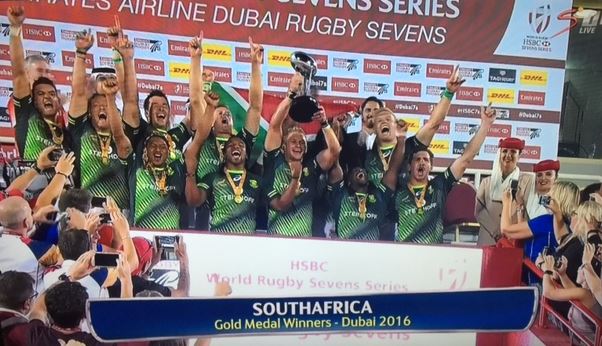 Springbok Sevens coach Neil Powell on Saturday applauded the defensive effort of his Blitzboks team at the Emirates Dubai Sevens, where the team won the Cup final 26-14 in Dubai.

Powell said they needed to improve on that aspect of play, as it was poor on the opening day of the tournament on Friday.

“It worked well and showed how effective our defence can be when it is functionally properly, unlike yesterday. We had a game plan for Fiji, they are dangerous with offloads, so we needed to be in their faces. Credit to the guys, they executed perfectly.”

Powell was pleased with their performance in the final.

“It was a really great performance against Fiji. We played Fiji five times last year and won three times, so have an idea how to best contain them. You have to keep it structured.”

Powell realises the pressure will build on the side to repeat the performance in Cape Town next weekend when the HSBC Cape Town Sevens will be hosted at the Cape Town Stadium on Saturday 10 and Sunday 11 December.

“We will have pressure this week, but the key for us will be to return to zero as soon as possible. We need to start all over again. It will take another massive effort to defend our title in Cape Town.”

Player of the Tournament, Seabelo Senatla, said it was important for the team to start the season well and for himself not to rest on his laurels after being named World Rugby Sevens Player of 2016.

“It was a big one for me last year, but I needed to start all over again. I am very happy what we did this weekend. These guys were awesome and continued to keep feeding me in space, hats off to all on my inside that is doing all the hard work,” Senatla said.