Praise for Mendoza and Pumas after historic occasion 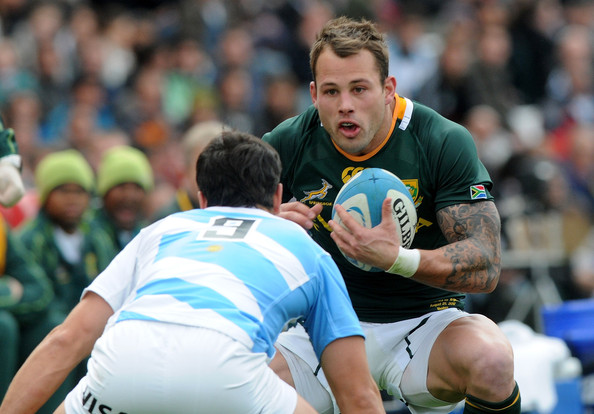 Francois Hougaard during the first ever Rugby Championship match hosted in Agrentina at the Estadio Malvinas Argentinas on August 25, 2012 in Mendoza. Photo by Getty Images.

Argentina have made their home debut in The Rugby Championship, with the beautiful Estadio Malvinas Argentinas playing host to the Springboks, and the Pumas had a great first half to be ahead 13-3 at halftime, before finishing the match defending with their lives to record a famous 16-16 draw.

It now means that Argentina has at least achieved a draw with every superpower in world rugby, with their result against the Springboks joining their legendary result in 1985 where they held the All Blacks to a 21-21 at the FC Oeste in Buenos Aires.

It was the eighth visit by the Springboks to Argentina, but their first test outside of Buenos Aires, and for the locals of Mendoza, it is likely that the near 50,000 screaming supporters will again get to taste action in The Rugby Championship.

Luis Castillo, president of the Union Argentina de Rugby (UAR) said it was highly likely that Mendoza would host matches in the 2013 and 2014 seasons.

“Mendoza will likely remain headquarters for Argentinean matches in The Rugby Championship in the next two years,” he said.

“Speaking with the local governor (of Mendoza), talks are advanced, although not yet with the other venues, as Rosario and La Plata, where we still need to talk.”

“This match in Mendoza completely filled high expectations, but there are always things to improve and learn, but I can tell you that the public were surprised and amazed.”

“Mendoza is a province that offers much.”

“The intention is to keep the tournament here…because there is also a very important affinity between Mendoza, Cape Town and South Africa.”

It was a packed house in Mendoza, with locals and visitors alike mingling in a raucous atmosphere, where many from Buenos Aires had made the drive along the Ruta Nacional 7 Carretera Libertador General San Martín to watch their team play.

SANZAR CEO Greg Peters said that the anthems set the tone for a match and he wasn’t shocked by the result.

“It was a fantastic day,” Peters said.

“People were very warm and gave us a great reception.

“It was a fantastic occasion for the UAR, Los Pumas and Southern Hemisphere rugby, and they proved what the SANZAR countries knew, that they would be formidable opposition at home.”

“The Pumas also took a step up, showing in just their second match they deserve to be in our preeminent international tournament – The Rugby Championship.

With the ‘trumpetas’ blaring (essentially an Argentine equivalent of a vuvuzela), the touch of freshness in the air did nothing to dissuade the supporters, in what were otherwise brilliant dry conditions with no real breeze to speak of.

The match promises much in the years to come as teams make the trek to Argentina to play Los Pumas.

Ignacio Ramos Cravero: Thanks to the All Blacks, Wallabies and Springboks to let Pumas to participate in this Rugby Party, The Rugby Championship. And Welcome to our country, the República Argentina!!!!

Rolando Montes: SANZAR teams are going to know how Pumas can do, maybe not this time, but surely in the near future, we do learn and we will show you what we can be able to do in rugby. ABs will have to do their best when they play in LaPlata….

Agustín Ignacio MartínezRibeiro: Maybe it was one of SA’s worst performance ever because the Pumas reached to have a game as they planned. VAMOS PUMAS!!!!!!

Diego German Serpero: Welcome to The Rugby Championship in Argentina. I hope all of you enjoy my country and our rugby… GO Pumas!