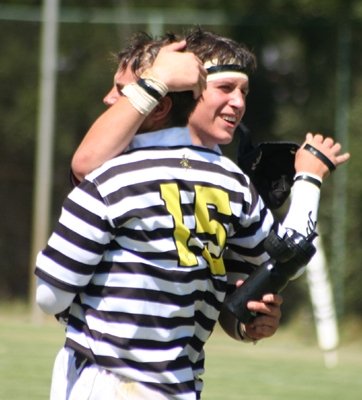 KES will play Jeppe’ at King Edward VII on 20 April 2013 in a Premier Interschools match that will be televised LIVE on SuperSport 1.

On Saturday 20 April 2013 KES will have a bone to pick with Jeppe. Last year against all odds, Jeppe surprised KES with guts and glory rugby and pulled off a remarkable win against a very strong KES team. They lived up to their school motto “”Nothing is too difficult for the brave”. This year however, KES have homeground advantage again and will not repeat the same mistakes they did last year. Or will they? This is what Premier Interschools is all about, playing against your oldest and fiercest rivals and every player giving his all to win for his school. On the 20th of April, this epic battle between two of Johannesburg’s top rugby schools will once again play itself out against a capacity crowd.

In 1902, when the Boer War came to an end, there was an urgent need for schools in the Transvaal. The Milner Administration, in search of suitable buildings in which to establish temporary classrooms, found a vacant cigar factory in Johannesburg, on the corner of Gold and Kerk Streets, which was chosen as venue for “The Government High School for Boys”, also known as the “Johannesburg High School for Boys”. Thus was born a school which ultimately became the King Edward VII School.

It grew so rapidly that, in 1904, it was moved to Barnato Park where it was established in the mansion that originally had been designed for the mining millionaire Barney Barnato, who died at sea in 1897. At its new location, it was referenced as “Johannesburg College” but, within seven years, the premises were deemed inadequate and, in 1911, the school was moved to its present site on the Houghton ridge where new buildings had been impressively-designed and specifically constructed for the school. The time frame, within less than a year after the founding of the Union of South Africa and the death of Queen Victoria’s eldest son and successor, Edward VII, led to the proposal that the institution’s name be changed to honour his memory, thus establishing the appellation, King Edward VII School.

The School remains a public school, with an enrolment of over 1,000 boys from grades 8 to 12 (ages 13 to 18). King Edward VII Preparatory School, which is situated adjacent to the High School and shares its grounds, caters to boys from grades 0 to 7. In 2011 the School won the inaugural South African National Schools Moot Court Competition
Nearly a century old, the school buildings of King Edward retain their impressive appearance and are considered national monuments. These include the school hall, the back facade, the front facade, the lecture theatre and library wing, the memorial wing and the cenotaph in the main quad.
They are also fully committed to fulfill their duty to the school and offer newly renovated classes, a modern and renovated lecture hall, one of the biggest libraries in Gauteng, three state-of-the-art IT centres with 110 computer stations, art centres, a museum, historic hall and theatre built by the Dramatic Society in previous decades

Shortly after Desmond Davis, an Association Football enthusiast, retired in March 1931, plans were laid by his successor and “father” of all sport at King Edward , “Robbie” Robinson to start rugby at the School in the 1932 season. To this end he enlisted the help of a “god-father” in the person of Eric F.K. Tucker. He persuaded the Transvaal Rugby Union to level and grass an ugly dusty slope on the School grounds to transform it into two rugby fields to be available for the 1932 season.
On 27 April 1932 the School’s fields were opened when the Chairman of the Governing Body, and ex-Matie, H.J. Hofmeyr kicked off the first ball. On that occasion Frank Robinson expressed the wish that King Edward boys would repay the Transvaal Rugby Union in due course by reproducing in senior rugby, what they had learned while at School.

As early as 1931 the School rugby colours had been decided. For the 1st XV cardinal red jerseys with white collars and a badge and white pants and red and white ringed socks. The rest of the School were to play in red white and green ringed jerseys with dark blue pants and black stockings with red and white tops. And so it has continued to this day with the obvious change to the socks and to white pants for the whole School. It was only in 1935 that the badge was incorporated.

Bruce Macdonald who left the School in 1939 was selected for Transvaal and is the first ex-K.E.S. boy to have played in a Currie Cup final in 1947. The 1956 side produced two provincial players via. A. Miller and J. Faber, while A.H. Bladen was a member of the 1961 side, and he was eventually selected for the Junior Springboks. Norman Picker’s (later a Transvaal player) 1968 side with a 100% record after 17 games played. A few other names from past decades that played representative rugby are: L. Barnard, G. Lawless, E. van der Merwe, R. Keil, S. Marot and D. Malherbe

There are many old boys plying their trade as rugby players, especially recently in the U19 and U21 provincial tournament. However in the senior set up they have: L Ruiters (Cheetahs Vodacom Cup), J Meyer (Sharks Vodacom cup), M Marx (SA u/20 Squad);
W Mjekevu (Lions, SA 7’s and SA U20), S Mtubeni (DHL Stormers), B Habana (DHL Stormers & Springboks) & J Van Niekerk (Toulon)

The following players from KES represented South Africa on the rugbyfield.
Joe Van Niekerk (2001 – 2008); Bryan Habana (2004 – Present)
The latter is arguably KES’s most famous rugby player. He currently holds the record for the most tries scored in Bok tests as well as equaling the record for most tries scored at a Rugby World Cup tournament which he achieved in the 2007 RWC in France.

Bryan Habana as we know him…tearing up the opposition and scoring tries for SA!

With the current crop of excellent youngster coming through the ranks, one can be assured that KES will keep on producing rugby players that will go on to represent their country one day.

Jeppe High School for Boys is a public secondary school is located in Kensington, a suburb of Johannesburg, Gauteng, South Africa, one of the 23 Milner Schools.The school’s motto is the Latin Forti nihil difficilius, meaning “Nothing is too difficult for the brave”, also translated as “For the brave, nothing is too difficult”. Jeppe High School for Boys is the oldest known school in Johannesburg

The school was founded as Saint Michael’s School in 1890 in Johannesburg, four years after the gold rush that founded that city. In 1896 it was bought by the Witwatersrand Council for Education, which was concerned with the education of English speakers in the Dutch-speaking South African Republic. In 1897 the school was renamed Jeppestown Grammar School after the German-born philanthropist Sir Julius Jeppe. The school was closed during the Second Boer War but was reopened soon after by the educationist Alfred Milner, 1st Viscount Milner, and renamed Jeppe High School for Boys and Girls. In 1911 the school moved to its present site in the suburb of Kensington. In 1919 a separate girls’ school, Jeppe High School for Girls was formed. Originally playing soccer, it switched to rugby union in the 1930s, and has since produced four Springbok internationals and one international coach. It also has a preparatory school.

As noted in the book Historic Schools of South Africa “perhaps more than any other Johannesburg school, it reflects the history and changing character of the city and has always been a melting pot for children of diverse socioeconomic, language and cultural backgrounds”.
Recognised as one of South Africa’s Top 20 boys schools, the defining characteristics of the men it produces often centre on the principles of loyalty, honour and friendship. Jeppe’s ability to shape the characters of boys into men is its greatest success.
Every old school has a powerful narrative that defines its core identity. For Jeppe, it is the story of the Jackson clan, whose father arrived at the door of the school many years ago, an orphan from Rhodesia who was shunted to Durban and then to Johannesburg, with nothing at all. The school turned an orphan into a decent man whose sons also attended Jeppe. It is a story of how a poor boy can become a decent man.

It is the story of Jeppe. Its website declares proudly what no other English school has as a line of distinction: “Jeppe has never been an elitist school.” The Theo Jackson Scholarship Fund supports poor boys; sports and academics are not that important, says the fund. Character is. That story of struggle and the virtue of character run like a golden thread through the history of Johannesburg’s oldest high school since the 1890s, when it experienced financial difficulties after the school was closed for the duration of the Anglo-Boer War.
It is that badge of struggle, that nothing comes easily, that character is everything, that is written into the Latin motto.

Rugby at Jeppe
Jeppe High School for Boys has had a proud rugby tradition. Sportsmanship was stressed and results throughout the divisions were good. An unbeaten junior team is a common occurrence but the Jeppe 1st XV’s have only had three unbeaten teams – In 1954, 1959 and 1967, although in many years they have lost only one match. The First XV field is named the Collard Field after Mr Jack Collard, who coached the First XV from 1942 to 1960, but without a doubt the most famous Jeppe old boy and coach has been Jake White, his fame going far beyond the Collard Field to the great grounds of the world. He coached Jeppe to successful years from 1989 to 1994.
Jake White was born in Johannesburg and attended Jeppe High School for Boys where he played in the First XV. He began his coaching career as a high school rugby coach at Parktown Boys’ High School’s First XV before returning to his old school as a teacher and as coach of the school’s First XV. White’s success with the school team resulted in him being appointed as provincial schools coach. Later he coached various under-19 and under-21 sides before assisting Springbok squad preparations by doing video analysis for them. By this time he was well known for his technical prowess in rugby circles, and he lived up to his reputation by coaching the under-21 Springbok side to a victory in the U-21 Rugby Union World Cup in 2002.

White was appointed as head coach of the national team in early 2004 when South African rugby was in turmoil following their poor performance at the 2003 World Cup. He coached them up to 2007 culminating in South Africa’s 2nd Rugby World Cup win.

Some notable achievements by White:

Jeppe Honoured Jake for his achievements