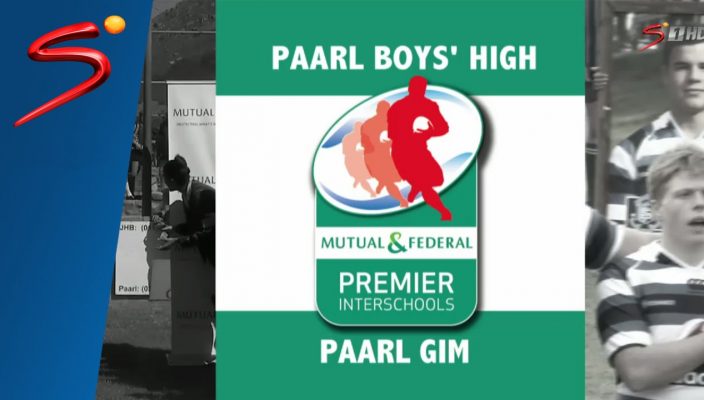 Paarl Boys’ High showed their class when they rallied in the second half to come from behind and edge past Paarl Gimnasium to hold on for a deserved 26-25 win.

The first half belonged to the team from the North of Paarl and Gimnasium showed why they are so highly rated. Scoring the only try of the first period they had a 11-6 lead by halftime. However, it Boys’ High who were the better team in the second half and secured the thrilling win.

Gimnasium put the first points on the board through a penalty from flyhalf Theo Boshoff in the 4th minute of the game when Boys’ High were offside. Two minutes later Gianni Lombaard levelled the scores for the same offence from Gimnasium and at 3-3, the game then started in earnest after the first early jitters were shaken off.

Boshoff again converted a penalty after a ruck offence and Gimnasium were 6-3 up after ten minutes. Paarl Boys’ then went on the attack after a great grubber from Lombaard and a subsequent steal in the line-out. The Gimnasium defence held tight and Lombaard opted for a drop goal to even the scores at six all after twenty minutes.

They showed some glimpses of what they are capable of when right wing Urgene Johannes broke the midfield on the counter attack, but possession was turned over and Gim worked their way back into the Boys’ High half. Big 8th man Muller Uys broke from a scrum and made some hard yards, from the resulting ruck, captain and scrumhalf Zak Burger broke to the blind, threw a dummy and went over for the first try. Boshoff could not convert and the remainder of the half was played out with the score at 11-6 in favour of Paarl Gimnasium.

Paarl Boys’ came out in the second half determined to even up the score and immediately went on the attack. Centre Manny Rass put in a great defensive tackle, gathered the ball again and put Boys’ High on the front foot. The ball went wide to the left and 8th man Khanya Ncusane went over but was adjudged to be held up in the tackle.

Boys’ High did get a penalty and it was dually converted by Lombaard, the score was 11-9. Uys went on a bullocking run down the left and offloaded in the tackle to centre Chris Willemse who passed the ball into the hands of Boys’ High scrumhalf Michael Visser.

Paarl Boys’ won a penalty when Visser went for the quick tap, he was ruffed up on more than one occasion by the Gimnasium players which resulted in a yellow card for left wing Muller du Plessis for cynical play.

Paarl Boys’ took the line-out and hit to the left with a great run from winger Takir Abrahams. He was tackled just short and from the ruck Boys’ High went wide to the right again for Ncusane to score his team’s first try in the corner.

Lombard missed the conversion and with the score at 14-11, the ‘Blue Team’ went into the lead for the first time.

Five minutes later Paarl Gim were back in front when Willemse went over after a quick tap penalty was taken to take the score to 18-14.

It was at this stage with fifteen minutes to go that the Boys’ High machine kicked into top gear. Rass broke brilliantly on the outside and offloaded to Lombaard who went over the line but was again held up by some good defensive tackling. They received a penalty and kicked for the corner. From the line-out the pack drove for the tryline and hooker Daniel Jooste was credited with the team’s try. Lombaard wasn’t able to convert and Paarl Boys’ held a slender 19-18 lead.

Another penalty got Boys’ High into Gimnasium 22 again and from the line-out they applied the same technique and again Jooste scored from a driving maul. Lombard converted the crucial kick and Paarl Boys’ lead 26-18 with seven minutes of play left.

Gimnasium however weren’t done yet and came back fighting. Boshoff went over for a try after relentless pressure from Gim and converted his own try. With the score at 26-15 the last few of minutes of the match was set up to be a humdinger. Paarl Boys’ took control of the ball and played the last few minutes in their opponents 22m area. They won a penalty and from the line-out, Horn went over but again but was held up by some superb defence. Paarl Boys’ did not allow Gimnasium to get out of their own 22 for the last five minutes and with time up on the clock, they managed a turnover and Visser kicked the ball high into the stand to end a memorable Interschools match.